Industries Minister Hammad Azhar on Tuesday announced that the government is considering reopening even more sectors of the economy amidst the past month’s decline in new infections, including tourist sites, restaurants and marriage halls. In a posting on Twitter, he said the National Command and Operation Center (NCOC) had started consulting with provinces on how best to proceed with the easing of restrictions.

Pakistan’s welcome decline in the daily infections and overall cases, meanwhile, has encountered some trepidation from experts who warn that the country has yet to fully utilize its claimed testing capacity of 68,470—which has actually been reduced from an earlier 71,780—and is currently testing significantly below numbers proposed by global health experts. According to WHO, Pakistan’s testing regimen likely only records the most symptomatic patients while ignoring the spread among asymptomatic carriers.

The provincial cabinet committee for controlling COVID-19 on Tuesday decided “in principle” to reopen industries, restaurants, marriage halls, cinemas and other sectors, including gyms, beauty salons and indoor sports arenas, but linked the final decision on it to approval from the NCOC.

On Wednesday, authorities reported 4 new deaths due to COVID-19, raising total fatalities to 2,157. The province also reported 235 new infections, raising confirmed cases to 93,571, against 85,180 recoveries. There are now 6,234 active cases of the virus in the province.

The provincial government on Tuesday announced it would distribute Rs. 20 billion among people impacted by the COVID-19 lockdowns under the Sindh Peoples Support Program as part of its efforts to help citizens whose livelihoods had been affected.

The provincial government this week made testing for COVID-19 mandatory on people who visit hospitals with respiratory illnesses and flu-like symptoms in an attempt to gauge the true spread of the virus in the province.

The provincial government on Wednesday reported 5 new deaths, raising its death toll to 1,213. In the past 24 hours, its recoveries rose by 105 to 29,255, while its confirmed cases have increased by 71 to 34,324. There are currently 3,856 active cases of coronavirus in the province. 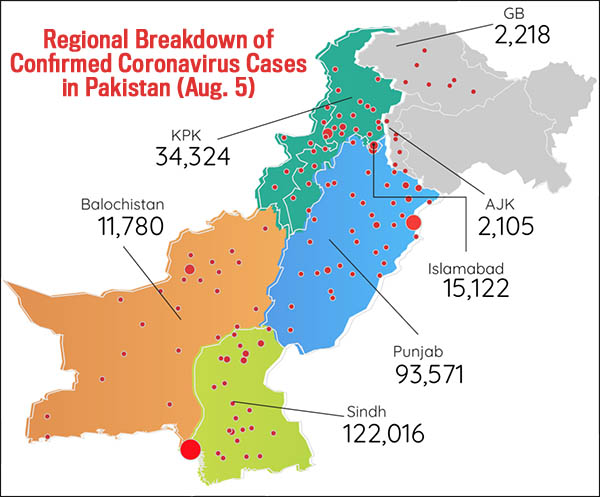 Provincial spokesman Liaquat Shahwani on Tuesday urged citizens to continue practicing social distancing and adopting preventative measures to prevent a resurgence of COVID-19. “Even though we have been witnessing a decline in COVID cases, we cannot say that the virus has been eradicated,” he said. “Not a single death has been reported from coronavirus in Balochistan since July 22, which is encouraging, but still the general public has to continue pursuing the SOPs,” he added.

Confirmed cases of the novel coronavirus in the province on Wednesday rose by 3 to 11,780. Overall, 136 people have died and 10,227 patients have fully recovered from the virus, leaving 1,417 active cases of COVID-19.

Islamabad on Wednesday raised its confirmed coronavirus cases by 27 to 15,122. There were no new deaths and 54 recoveries in the past 24 hours, sustaining death toll at 167 and raising recoveries to 12,732, leaving 2,223 active cases.

Confirmed cases of the novel coronavirus in Gilgit-Baltistan rose by 20 on Wednesday to 2,218. The region reported no new deaths, sustaining toll at 55, while its recoveries have increased by 19 to 1,820, leaving 343 active cases.

In Pakistan-administered Kashmir, confirmed cases have increased by 8 to 2,105. There was 1 new death and 73 recoveries in the past 24 hours, leaving 55 fatalities and 1,804 fully recovered. It has 246 active cases of COVID-19.

Globally, the virus has now infected more than 18,708,865 people, with over 704,438 reported deaths. Governments across the word halted flights, locked down towns and cities and urged people to stay at home at the peak of the virus’s spread, but there are now signs of easements in nations that have reined it in to help shuttered economies recover. Overall, around 11,925,745 patients of the 18.7 million+ infected have recovered thus far.