Addressing a press conference on Tuesday, Planning Minister Asad Umar urged the public to not become complacent over preventative measures with the decline in new COVID infections. “If we don’t stop flouting SOPs and social distancing guidelines, then the reduction in infections—that was earned through months of hard work—can be reversed,” he warned, stressing that extra care should be taken for the upcoming events of Pakistan’s Independence Day and Muharram.

The provincial government has issued its standard operating procedures (SOPs) for educational institutions, which are set to reopen from Sept. 15. Under the guidelines, students and faculty have been encouraged to frequently wash their hands; wear face masks during classes; maintain social distancing in queues and classroom settings; and avoid sharing lunches.

On Wednesday, authorities reported 3 new deaths due to COVID-19, raising total fatalities to 2,177. The province also reported 129 new infections, raising confirmed cases to 94,715, against 86,341 recoveries. There are now 6,197 active cases of the virus in the province.

The All Pakistan Restaurant Association has questioned the Sindh government’s decision to allow dine-in services at restaurants but require them to shut by 10 p.m., with the forum saying eateries in the province should be allowed to operate 24 hours a day, as being done in the rest of the country. The provincial government maintains that with the threat from COVID-19 still present, it is not yet ready to return to pre-COVID timings.

The provincial information department hailed on Tuesday the province reporting no new deaths from COVID-19 in the preceding 24 hours, with the government claiming this was due to its “stringent” policies.

The provincial government on Wednesday reported 4 new deaths, raising its death toll to 1,235. In the past 24 hours, its recoveries rose by 148 to 31,839, while its confirmed cases have increased by 104 to 34,859. There are currently 1,785 active cases of coronavirus in the province. 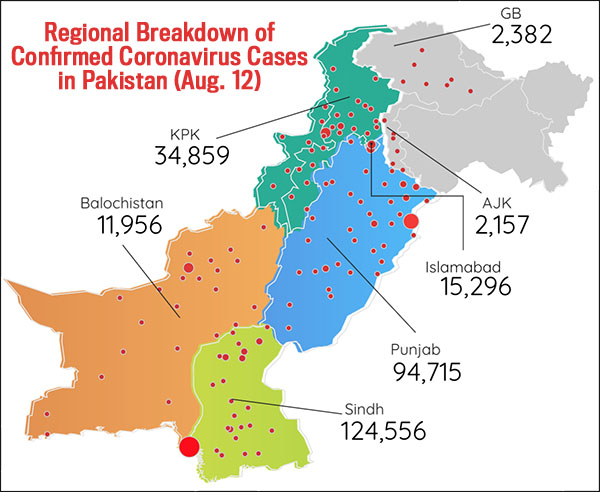 Confirmed cases of the novel coronavirus in the province on Wednesday rose by 35 to 11,956. Overall, 138 people have died and 10,439 patients have fully recovered from the virus, leaving 1,379 active cases of COVID-19.

Confirmed cases of the novel coronavirus in Gilgit-Baltistan rose by 11 on Wednesday to 2,382. The region reported 1 new death, raising toll to 58, while its recoveries have increased by 26 to 1,981, leaving 343 active cases.

In Pakistan-administered Kashmir, confirmed cases have increased by 7 to 2,157. There were no new deaths and 21 recoveries reported in the past 24 hours, leaving 59 fatalities and 1,936 fully recovered. It now has 162 active cases of COVID-19.

Globally, the virus has now infected more than 20,522,191 people, with over 745,927 reported deaths. Governments across the word halted flights, locked down towns and cities and urged people to stay at home at the peak of the virus’s spread, but there are now signs of easements in nations that have reined it in to help shuttered economies recover. Overall, around 13,441,913 patients of the 20.5 million+ infected have recovered thus far.