Pakistan reported 342 new cases in 24 hours on Tuesday, bringing the total number of confirmed coronavirus cases to 5,716, with 1,378 recoveries and 96 deaths, leaving 4,242 active cases in the country.

Late Monday night, Punjab Chief Minister Usman Buzdar posted on his Twitter account that the province had now reached 2,826 confirmed coronavirus cases—the largest number in the entire country. He said that 1,059 of these were “non-quarantine” cases, or people who had contracted the disease either by travel or by local spread. Of the remaining, 701 have been reported from quarantine centers catering to returning pilgrims from Iran in Dera Ghazi Khan and Multan; 89 among prisoners; and 977 among members of the Tablighi Jamaat.

The total deaths reported by the province, meanwhile, climbed to 24, with 9 patients currently in critical condition. Overall, the province has administered 41,781 tests for the coronavirus, a jump of approximately 3,500 from the previous day.

On Monday, as part of its relief measures, the Punjab government issued a notification stating that no landlord would be permitted to evict any tenant from April 10-June 10 for non-payment of rent in the face of the economic impact of the lockdowns designed to curb the spread of the disease. “Protection is the best defense,” posted provincial health minister Dr. Yasmin Rashid on Twitter.

According to the National Institute of Health’s official dashboard, Sindh’s confirmed cases of the coronavirus have risen to 1,452 with 31 deaths and 419 recoveries. This leaves 1,002 active cases in the province. According to Meeran Yousuf, media coordinator at the Sindh Health Department, 271 of the 274 returning pilgrims who were under quarantine in Sukkur have now fully recovered.

The province is leading the charge in voicing alarm over the spread of the virus amid the ongoing lockdowns. Chief Minister Murad Ali Shah on Monday told a press conference that more “stricter” lockdowns were needed, adding that reopening industries and businesses at this stage could prove disastrous. He also warned that the virus was now spreading rapidly through local transmission and if it reached the impoverished slums or rural areas, it would be very difficult to overcome.

Shah’s press conference followed members of the ruling Pakistan Tehreek-e-Insaf accusing it of trying to ruin the economy. To this, Shah said that the government could fix the economy at some point—it could not bring back the dead.

The number of confirmed COVID-19 cases in Khyber-Pakhtunkhwa province has risen to 800, with 35 deaths and 153 recoveries, leaving 612 active cases in the province. Health and Finance Minister Taimur Jhagra conducted a meeting with Prime Minister Imran Khan on Monday in which the two discussed the situation arising from the coronavirus pandemic.

“He [P.M. Khan] warned that with the further spread of COVID-19, our systems and capabilities would be further tested, and that we had to be ready for that,” said Jhagra about the meeting on Twitter. “The P.M. urged to make sure that even under extreme pressure, we take out the time to step back and think strategically, every day, and in doing so, that we make sure that in solving for the corona crisis, we make sure we protect the livelihoods of the poor and working classes,” he added. 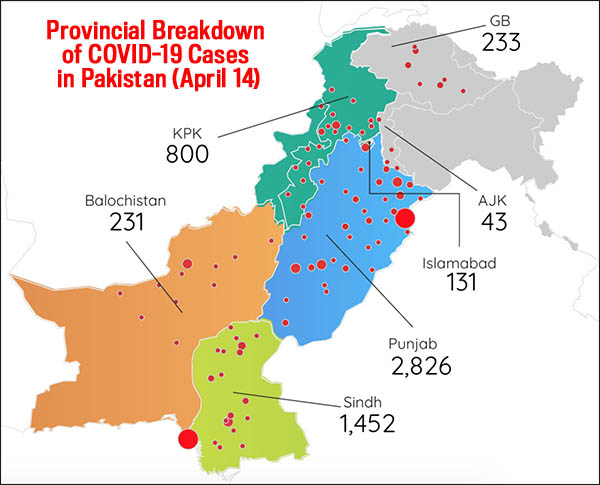 The country’s least populated province reported one new case and one new recovery in the past 24 hours, bringing its total cases to 231, with 124 recoveries and 2 deaths. It currently has 105 active cases of COVID-19. Balochistan government spokesperson Liaquat Shahwani on Monday told Geo News that thousands of testing kits provided by the federal government had lacked materials or had been faulty, delaying their desire to ramp up testing.

To make up for this shortfall, said Shahwani, the government had decided to proceed for random testing. “This should help us determine the exact trajectory,” he said.

In the federal capital, no new cases were reported in the past 24 hours, nor were there any new deaths or recoveries, maintaining its confirmed cases at 131, with 15 recoveries and 1 death. There are currently 115 active cases in Islamabad. Meanwhile, in Gilgit-Baltistan, the infections rose to 233, as 6 more people recovered, leaving 75 active cases. There have been 3 deaths attributed to COVID-19 in Gilgit-Baltistan thus far. In Pakistan-administered Kashmir, which has thus far reported no deaths from COVID-19, the total number of confirmed coronavirus cases rose to 43, with 4 recoveries, leaving 39 active cases.

The Government of Pakistan is set to announce today (Tuesday) whether or not it will extend the existing lockdowns to curb the spread of the coronavirus. The federal government is seeking to resume operations for the construction industry (and its related sectors), but the Sindh government has voiced alarm over this, claiming it could result in rapid spread of the disease among vulnerable populations.

Globally, the virus has now infected more than 1,925,300 people, with over 119,700 reported deaths. Governments across the world have halted flights, locked down towns and cities and urged people to stay at home. Overall, around 447,975 patients of the 1.9 million+ infected have recovered thus far.