There has been a dramatic surge in new cases of COVID-19 in the country since the government ended lockdowns on Prime Minister Imran Khan’s insistence that they would kill more from hunger than would die from the virus.

In the 24 hours preceding 8:00 a.m., Friday, the country recorded 107 deaths, increasing total deaths to 2,463. In the same time, 1,856 patients tested negative, raising recoveries to 40,247. There are currently 83,223 active cases of the coronavirus in the country, with the National Command and Operation Center reporting 1,787 of them are in critical condition.

The prime minister on Thursday announced he would “personally” monitor the enforcement of standard operating procedures (SOPs) to curb the spread of the coronavirus, claiming the government would no longer offer leniency to violators. In a nationally televised address—his second of the week—he warned that people’s lives were being placed at risk without continued SOP violations.

The bulk of Khan’s address, however, was dedicated to his visceral disdain for lockdowns, with him citing a survey that claims neighboring India has suffered economically due to its sustained curfew.

The provincial government on Thursday decided to form a special working group consisting of experts to determine how best to curb the spread of coronavirus in Lahore, which has rapidly emerged as the epicenter of the country in the country. In a meeting of the province’s civil and military leadership, it was decided that the working group’s recommendations would be presented to the federal government for final approval.

The government had buried a similar report specifically seeking special measures in Lahore in mid-May, as the P.M. had wanted to reopen all sectors of the economy before Eid.

On Friday, authorities reported 49 new deaths due to COVID-19, raising total fatalities to 890. The province also reported 1,919 new infections, raising confirmed cases to 47,382, against 9,546 recoveries. There are now 36,946 active cases of the virus in Punjab province.

Adviser to the C.M. Murtaza Wahab on Thursday said that 1,712 children under the age of 10 had been infected with COVID-19 in Sindh thus far. “Unfortunately, 4 such children have passed away,” he posted on Twitter, urging people to stay at home and practice social distancing. 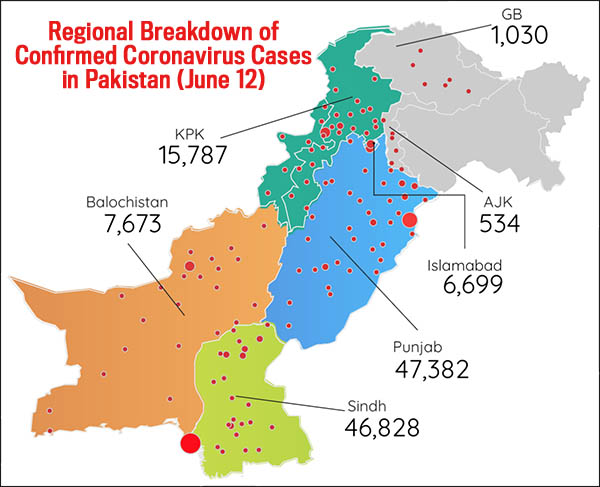 Provincial spokesman Liaquat Shahwani on Thursday announced that since lockdowns had been imposed in March, 1.7 million people had drifted below the poverty line. He urged people to fully adopt SOPs, adding that thus far 7 percent of the confirmed cases in Balochistan had been among children; 42 percent among youth; and 6 percent among elderly above 60.

Confirmed cases of the novel coronavirus in the province rose by 338 to 7,673, with 2 new deaths increasing fatalities from the disease to 75. Overall, 2,673 patients have recovered from the deadly virus, while there are currently 4,925 active cases of COVID-19.

The Islamabad Capital Territory announced on Thursday that it was imposing a curfew in parts of the city to stem the spread of coronavirus. “Sector G-9/2, G-9/3 and Karachi Company are to be sealed after 36 hours,” announced Deputy Commissioner Hamza Shafqaat. “There are almost 200 active cases in this sector. Lockdown is being done on the advice of Health Department and epidemiologists,” he added.

The federal capital recorded 463 new infections, raising confirmed cases to 6,699, with 3 new deaths raising fatalities to 65. Overall there have been 1,164 recoveries, leaving 5,470 active cases of COVID-19.

Confirmed cases of the novel coronavirus in Gilgit-Baltistan rose by 12 to 1,030 on Friday morning. Overall, the region has thus far reported 15 deaths and 673 recoveries, leaving 342 active cases.

In Pakistan-administered Kashmir, confirmed cases increased by 46 to 534. In the past 24 hours, the region has reported 1 new death and 18 recoveries, leaving 10 deaths and 237 recoveries total. There are now 287 active cases of the coronavirus in the region.

Globally, the virus has now infected more than 7,597,300 people, with over 423,840 reported deaths. Governments across the world have halted flights, locked down towns and cities and urged people to stay at home, but there are signs of easements in nations that have reined in the virus’ spread to help shuttered economies recover. Overall, around 3,841,499 patients of the 7.5 million+ infected have recovered thus far.