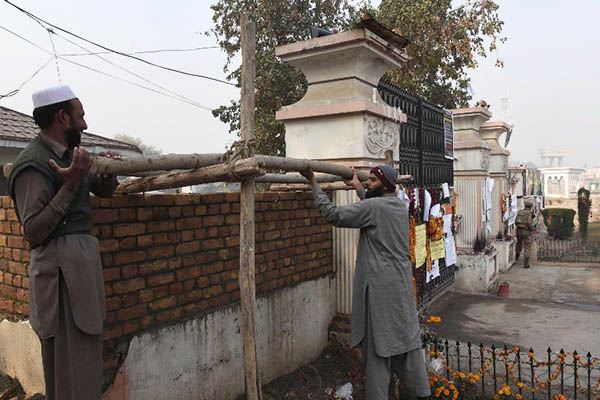 Laborers rebuild the boundary wall of the Army Public School. A. Majeed—AFP

Thousands of Pakistanis flocked to the Army Public School in Peshawar on Sunday to mourn the 149 people—mostly children—massacred by the Taliban and demand action against militants.

Men, women and children from across Pakistan visited the Army-run institution to offer prayers for those killed in the country’s deadliest-ever terror attack. Mourners placed flowers, bouquets, placards, and lighted candles in front of photos of murdered students.

Masons laid bricks and poured cement to raise the height of the wall around the Army Public School as mourners chanted slogans such as “Death to terrorists,” “Long live Pakistan Army,” “The blood of martyrs will not go waste” and “Taliban are savages.”

“What kind of a person can kill a child?” asked local resident Imdad Hussain, who came to pray for the children. “What kind of justice is this, what kind of Islam is this?” he asked, urging the government to swiftly wipe out terrorists.

A local woman, her face covered with a shawl, said parents had thought their sons and daughters would be safe in school. But now they believed their children were not safe anywhere. “First they attacked mosques, then markets and now they have started attacking schools. We cannot tolerate this. We can die, but we will not let our children be killed,” she said.

Shugufta Bibi, 28, told AFP her friend lost his son in Tuesday’s attack and she had come to pay respects to his memory. “I demand that the government close in on the terrorists and hang them in public,” Bibi said.

Tributes and condolences poured in on social media websites Facebook and Twitter. The city’s Christian community cancelled Christmas celebrations and would just hold a service on Dec. 25, said Rev. Patrick John of All Saints Church.

The school massacre has been condemned even by the Afghan Taliban, who are loosely affiliated with the Taliban in Pakistan. In a statement Sunday the regional Al Qaeda chapter also expressed grief at the killings and urged fellow militants to target only security forces. “Our hearts are bursting with pain and grief over this incident,” said Osama Mehmood, spokesman for Al Qaeda’s South Asia chapter.

After the school attack Prime Minister Nawaz Sharif ended a six-year moratorium on the death penalty, reinstating its use for terrorism-related cases. Two militants convicted of separate offences were the first to face the noose.

Pakistan has also put all its airports on red alert as the military intensifies operations against militants in the tribal areas. The Army has also been deployed to guard major prisons housing militants. Officials have said there would be up to 10 more executions in coming days.