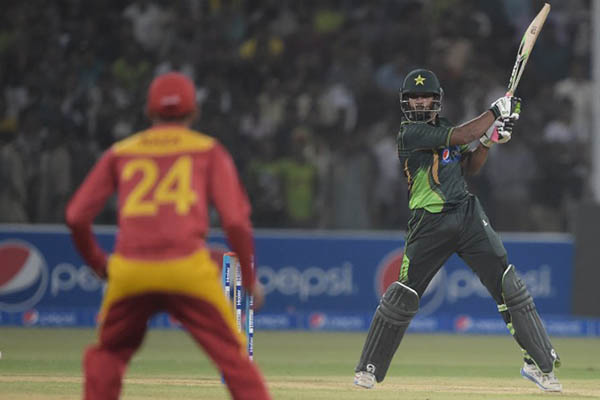 A packed stadium with strict security marked the first international match in Pakistan in six years.

Pakistan celebrated international cricket’s return after six years with a five-wicket win against Zimbabwe in the first Twenty20 international at a packed and security-tight Qaddafi Stadium on Friday.

The win doubled the joy for the hosts as the match brought international cricket home for the first time since attacks on the Sri Lankan team bus in Lahore in March 2009. Strict security was in place with 4,000 policemen on duty, but that did not stop cricket-deprived fans from packing the 27,000-capacity stadium.

Pakistan opener Mukhtar Ahmed hit a maiden half-century during his rapid 45-ball 83 runs to help Pakistan achieve their best Twenty20 chase in 19.3 overs and take a 1-0 lead in the two-match series.

Zimbabwe captain Elton Chigumbura hit eight boundaries and a six in his 35-ball knock during his career best 54 to lead Zimbabwe to an imposing 172-6 in their 20 overs after electing to bat.

Fans lined up for entry five hours before the start of the match at 7 p.m. and had to go through five checkpoints before entering the stadium.

Fireworks opened the match with President Mamnoon Hussain introduced to the teams. Captain Shahid Afridi said the win sent out a positive message that the country was a safe, secure place to visit.

“It’s a great occasion and the win made it greater,” said Afridi. “With this match we have given a positive message to the world that Pakistan is a safe country.”

Despite the loss, Chigumbura was happy that his team played a major role in a landmark event. “They supported both teams and it’s always good to play in front of big crowds and hopefully more spectators will come to the next games too,” said Chigumbura. “It shows that Pakistan people love cricket. We’ve been safe and well looked after.”

On the field, Pakistan bettered their highest Twenty20 chase by one run, beating the 172 they chased against Bangladesh at Pallekele in 2012.

Mukhtar, playing only his second international game, gave Pakistan a sound start with an opening stand of 142 with Ahmed Shehzad who made a 39-ball 55 with six boundaries and a six. Mukhtar hit 12 fours and three sixes before he edged spinner Greame Cremer behind the wicket.

Earlier Zimbabwe got off to a flier with opener Hamilton Masakadza (43) and Vusi Sibanda (13) racing to 58 in 6.5 overs before recalled paceman Mohammad Sami dismissing both off successive deliveries. Chigumbura then held the innings together with a rapid 42-run stand for the fifth wicket with Pakistan born Sikander Raza who hit one six and a four in his 13-ball 17.

Sami, playing his first international match for three years, dismissed Raza to finish with 3-36. Chigumbura ensured Zimbabwe get to a respectable total by hitting three boundaries in paceman Wahab Riaz’s 18th over and then hit a six off Sami in the next to reach his second Twenty20 half century.

Chigumbura’s previous best T20 score was 53 not out he made against United Arab Emirates at Sylhet in Bangladesh last year.

The second Twenty20 will be played on Sunday followed by three one-day internationals on May 26, 29 and 31—all in Lahore.