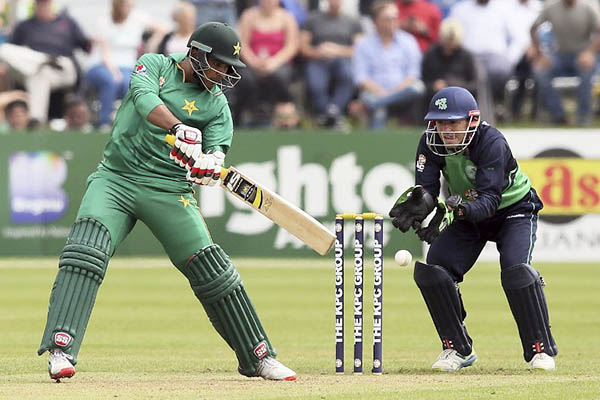 Sharjeel Khan’s blistering 152 laid the platform for Pakistan’s 255-run thrashing of Ireland in the first one-day international at Malahide on Thursday.

Sharjeel’s maiden century in the format became the third quickest 150 ever seen in ODI history as Pakistan piled up 337 for six in a rain-reduced 47 overs, with Shoaib Malik (57 not out) and debutant Mohammad Nawaz (53) also in the runs in the first of a two-match series which concludes at Malahide on Saturday.

Ireland were then all out for just 82, with Imad Wasim taking an ODI best five for 14 and Umar Gul, on his return to the side after an absence of 16 months, three for 23 as Pakistan completed their biggest win by runs in the format, while the hosts posted their second lowest total.

On a green pitch, which played well after a delayed start, Ireland conceded 300 for the second successive game at Malahide, after Sri Lanka amassed 377 for eight in June.

Pulling majestically, the 27-year-old Sharjeel passed his best ODI score—from 11 previous innings—of 61 with three successive fours off Peter Chase and brought up his hundred from just 61 balls with his 12th four to go with five sixes. “Today was a very special innings for me but I’ve been here for the last month in England with the Pakistan A team,” left-hander Sharjeel told reporters after stumps. “If you are focused on your batting, you can play your natural style. The pitch was not easy but I just focused on my shots and waiting on the full ball. The A tour was very good for me.”

When Sharjeel brought up his 150, just 24 balls after his century, he had added another nine boundaries, four of them sixes, and only South Africa’s AB de Villiers and Australia’s Shane Watson had reached the landmark quicker in an ODI.

Sharjeel was out next ball, caught behind off Barry McCarthy but Malik, who hit 57 off just 37 balls with six fours and two sixes and Nawaz, with seven fours, then put on 105 for the sixth wicket from just 83 deliveries. Only Tim Murtagh and McCarthy stood up to the onslaught, with Durham professional McCarthy finishing with his second four-wicket haul in only his seventh ODI, while wicketkeeper Niall O’Brien held four catches.

The Ireland innings got off to a disastrous start with Paul Stirling, returning to the opener’s slot, bowled second ball by Mohammad Amir and when Gul was introduced, he took three wickets in 10 balls to reduce Ireland to 32 for four.

Left-arm spinner Imad Wasim struck with his seventh delivery, having Niall O’Brien stumped for 10, one of only four Ireland batsmen to reach double figures.

Nawaz completed an excellent debut with the wicket of Ireland top-scorer Gary Wilson, stumped for 21 as he came down the pitch.

Pakistan had also lost an early wicket when captain Azhar Ali was caught behind to McCarthy’s ninth ball, but Mohammad Hafeez (37) helped and Babar Azam (29) proved able allies for Sharjeel to help their side recover. The only time Pakistan were troubled was when Sarfraz Ahmed followed Sharjeel back to the pavilion just three balls later to leave Pakistan 227 for five, but Malik and Nawaz continued to take apart Irish spinners Andy McBrine and Stirling, who conceded 107 runs in their combined 12 overs.