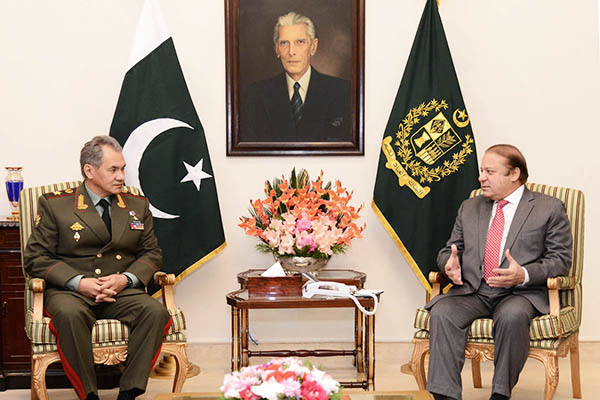 The agreement was signed between Russian Defense Minister Gen. Sergei Shoigu and Pakistani defense minister Khawaja Asif in Islamabad. “The signing of the military cooperation agreement between the two significant countries of the region is a milestone,” Asif said after the signing ceremony in a ministry statement. “Both sides will translate this relationship in tangible terms and further strengthen military to military relations,” Asif added.

The pair expressed hope that the agreement will pave the way for exchange of views and information, as well as issues related to strengthening of mutual trust and international security, counterterrorist and arms control activities. “The first ever visit of the defense minister from Russian Federation has come at a very critical juncture when U.S.-led NATO forces are drawing down from Afghanistan by the end of 2014,” the statement said. “Apart from promoting bilateral defense relations, the visit will enable both countries to join hands in bringing peace and stability in the region,” it added.

Russia has long been the largest supplier of arms to India, which is the world’s top arms buyer.

Russia’s ITAR-TASS news agency reported in June that the country had lifted its embargo on arms supplies to Pakistan and was holding talks on supplying Islamabad with combat helicopters.

Shoigu, who is accompanied by a 41-member high level delegation, commended the skill and expertise of Pakistani armed forces in fighting the war against terrorism, the Pakistani defense ministry said. “The world community not only praises but wants to do business with Pakistan now,” it quoted Shoigu as saying.

During his stay, the Russian defense minister will also hold in-depth talks with Pakistani authorities as well as meeting Prime Minister Nawaz Sharif. “The prime minister stressed upon the need to increase bilateral trade between the two countries which currently stands at $542 million and does not correspond to their trade potential,” the prime minister’s office said in a statement after the Shoigu-Sharif meeting.

Sharif invited Russian companies to invest in Pakistan, particularly in the energy sector and benefit from the business-friendly policies of the government, it added. “Pakistan is keen to enhance its multi-dimensional relations with Moscow, including defense,” Sharif said.