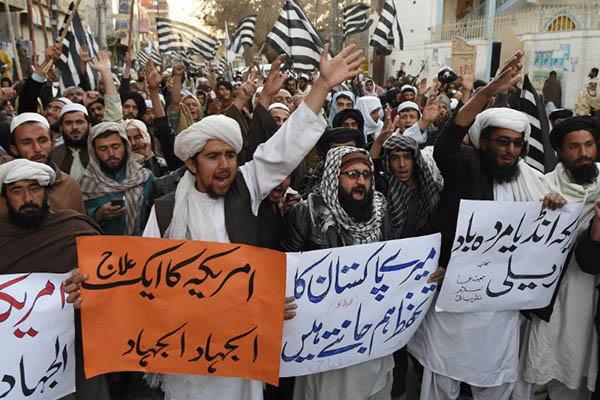 Demonstrators in Quetta protest against the U.S. Banaras Khan—AFP

In statement, Foreign Office says it is engaged with Washington and awaiting further details on Trump’s move

Pakistan denounced the U.S.’s decision to suspend hundreds of millions of dollars in security assistance as “counterproductive” on Friday, in a carefully worded response to the frustrated Trump administration’s public rebuke over militant safe havens.

The United States has been threatening for months to cut aid to Islamabad over its failure to crack down on groups such as the Afghan Taliban and the Haqqani Network, which it claims operates from bases in Pakistan’s northwest. The rhetoric has raised hackles in Islamabad and fears the row could undermine Pakistan’s support for U.S. operations in Afghanistan.

On Thursday, the State Department announced a dramatic freeze in deliveries of military equipment and security funding until Pakistan cracks down on the militants. The announcement ignited some small protests in Pakistan on Friday, including in Chaman, one of the two main crossings on the border with Afghanistan, where several hundred people gathered to chant anti-U.S. slogans.

But Pakistan’s foreign office issued a cautious statement in which it said it was “engaged” with U.S. officials and awaiting further details.

Without referring to the decision directly, it warned that “arbitrary deadlines, unilateral pronouncements and shifting goalposts are counterproductive in addressing common threats.” Emerging threats such as the growing presence of the Islamic State group in the region make cooperation more important than ever, it added.

Pakistan has fought fierce campaigns against homegrown Islamist groups, and says it has lost thousands of lives and spent billions of dollars in its long war on extremism. But U.S. officials accuse Islamabad of ignoring or even collaborating with groups that attack Afghanistan from safe havens along the countries’ border.

In September last year the U.S. had already suspended $255 million in funding to help Pakistan buy high-tech weaponry from American manufacturers. Now, the Defense Department has been instructed to stop making payments from “coalition support funds” set aside to refund Pakistani spending on counter-terrorist operations.

There will be exemptions, and officials refused to put a figure on how much Pakistan will lose out on if it fails to cooperate. But the National Defense Authorization Act permits the U.S. military to spend up to $900 million in the 2017 financial year and $700 million in financial 2018.

Privately U.S. diplomats insist the relationship is not in crisis. They say Pakistan is not refusing to fight the Haqqani Network, but that the two capitals disagree about the facts on the ground. Pakistan insists safe havens have been eradicated, but U.S. intelligence says it is still seeing militants operating freely.

Nauert was at pains to point out that the frozen funds had not been cancelled, and would be ready to be disbursed if Pakistan takes action to prove its commitment to the fight. “The United States stands ready to work with Pakistan in combating all terrorists, without distinction,” Nauert said.

So, truth be told, these bearded mullahs scare the bagezeez out of me. The fact that it’s a whole crowd filled with ’em makes me very suspicious. Are these the same fools who came out in favor of the blasphemy law? If so, please send them to India, for they are on their salary.
Secondly, peace cannot be established in that region of truth is not being told. The war in Afghanistan is not Pakistan’s war. It is a failed US war. And they need to step forward to take responsibility. They cannot hold Pakistan as the scapegoat.
Thirdly, India, US, and Afghanistan need to work alongside Pakistan in order to get a grip on the terrorists roaming freely in those parts.
Afghanistan needs to step up, be grown up and monitor their own border. And put to justice those they catch.
Lastly, Pakistan should not allow US to use any air,ground or borderz, roads to move supplies to support US troops in Afghanistan. Sorry. It’s not fair to be using Pakistan and then turning around and abusing her. That is unacceptable.