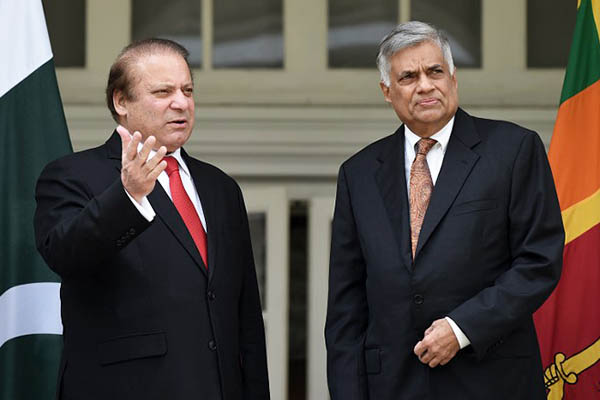 P.M. Sharif says he is eager to invest in island nation’s sugar and cement industries.

Prime Minister Nawaz Sharif called Tuesday for closer military cooperation with Sri Lanka on an official visit to the island.

Pakistan was a key supplier of arms and aircraft for Sri Lanka’s military in their battle against separatist Tamil Tiger rebels during the civil war that ended in May 2009. In talks with President Maithripala Sirisena and Prime Minister Ranil Wickremesinghe, Sharif also expressed a desire for more naval exchanges.

“I conveyed our desire for more frequent port calls, participation in military exercises and defense seminars and training of military personnel,” Sharif said in a statement following an official welcoming ceremony.

Sharif held talks with Wickremesinghe soon after his arrival on Monday and is due to fly back Wednesday after visiting the Buddhist pilgrim city of Kandy.

Sri Lanka sends its military officers for higher training to both Pakistan and India as well as to several other countries, including the United States and China.

The island’s closest neighbor India withheld arms and ammunition during the height of Colombo’s war with Tamil rebels, who have close cultural and religious links with the south Indian state of Tamil Nadu.

Sharif said he was also keen to expand trade with Sri Lanka and was eager to invest in its sugar and cement industries.