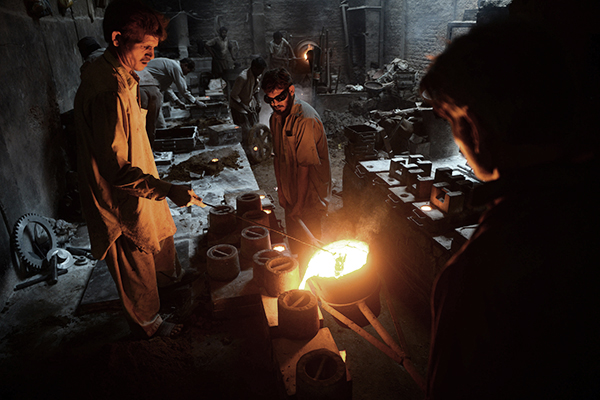 Islamabad expects the sale of government stakes in state-owned companies, loss making and profitable alike, to boost foreign-exchange reserves and introduce efficiencies across the corporate sector. But the plan is not without controversy.

The Nawaz Sharif government’s ambitious privatization program, the country’s largest, cleared an important hurdle this week with the approval of financial advisers for the sale of shares in more than half a dozen state-owned companies, including the massively profitable Oil and Gas Development Company Limited (OGDCL), Pakistan State Oil Company Limited (PSO), and Pak Arab Refinery Limited (PARCO).

Mohammad Zubair, chairman of the Privatization Commission, says the sale of state-owned assets will bring in “much-needed foreign exchange.” These reserves have dwindled in the past year, sinking to $3.2 billion, just barely enough to cover the country’s foreign payments for a month. Last month, cash-strapped and energy-inadequate Pakistan received a second payment under a $6.7-billion International Monetary Fund loan package, conditions for which included action to privatize state-owned businesses.

Opposition parties have condemned the privatization program, accusing Sharif of cronyism and selling off valuable national assets at bargain-basement prices.

“We are against privatization 100 percent,” Bilawal Bhutto Zardari, the 25-year-old patron-in-chief of the Pakistan Peoples Party, said recently. “This is not privatization, this is personalization.” He hit out against Lahore-based businessman Mian Mansha, who picked up state assets during the two previous Sharif governments and is eyeing several now, including PIA. Bhutto Zardari said the government should give stakes to labor—who could “run it much better than Mansha or [Sharif].”

But yesterday, Bhutto Zardari’s father, former president Asif Ali Zardari, seemed to come out in support of the Sharif government’s privatization plan and told his party’s M.P.s to ensure that the process is conducted “transparently.”

Zubair is aware of the allegations and fears of crony capitalism. “We want a speedy but highly transparent process,” he said.


In September, Prime Minister Sharif said the government was spending Rs. 500 billion annually to prop up state-owned companies. He said he wished to reallocate this sum toward social development, which would only be possible if the privatization program goes through. Pakistan has privatized only a single company, Pak American Fertilizer Limited during the Musharraf era, since the Supreme Court led by then-chief justice Iftikhar Chaudhry controversially struck down the sale of Pakistan Steel Mills in 2006.

Here are 32 of the 60-plus companies Islamabad wants to privatize: