The Government of Pakistan is set to announce further easing in lockdown restrictions today (Monday), amidst dramatic spikes in the number of confirmed cases of coronavirus—and deaths caused by the disease—nationwide.

In the 24-hour period preceding 8:45 a.m. Monday, the country reported 2,964 new infections of COVID-19, raising total confirmed cases to 72,460. Similarly, 60 deaths were recorded, bringing to 1,543 the fatalities caused by the virus. Nationwide, 14,398 tests were administered—nowhere close to the 50,000/day the government had claimed it would achieve by June—while 26,083 people have now made full recoveries.

There are currently 44,834 active cases of the coronavirus in the country.

Addressing a media briefing on Sunday, Special Assistant to the P.M. on Health Dr. Zafar Mirza sought to dispel reports—emerging from major urban centers across the country for past week—of healthcare facilities reaching saturation point and hospitals being forced to turn away patients because they no longer have the facilities to treat them. However, he admitted, that Pakistan has more COVID-19 patients in critical condition right now than at any earlier point in the pandemic.

According to the government’s official COVID-19 portal, the recovery rate of coronavirus patients in Pakistan now stands at 36 percent, against a fatality rate of 2.1 percent.

Pakistan’s most populous province has all but given up in trying to curb the spread of the coronavirus through movement restrictions, having already opened up most sectors, including industries, markets, shopping malls and offices, and recommended the reopening of restaurants, banquet halls, tourist resorts and public parks.

As a sop to those concerned about the intensity of the virus in the province—there are currently 18,722 active cases of the disease, more than any other part of the country—the government has suggested it might start imposing penalties for people who go out in public without masks.

On Monday, the provincial death toll due to COVID-19 increased by 22 to 497, exceeding all other provinces and federally administered areas. The province also reported 1,184 new infections, raising confirmed cases to 26,240, against 6,901 recoveries. There are now 17,680 active cases of the virus in Punjab province.

Chief Minister Murad Ali Shah, in his daily press briefing, lamented the rising detection ratio of tests administered to positive infections. “Our detection ratio comes to 21.6 percent, which is higher than various countries,” he said.

The total number of confirmed COVID-19 cases in the province on Monday morning rose to 28,245. Additionally, the province raised its casualties by 16 to 481, while its recoveries rose to 13,810. Overall, the province now has 13,954 active cases of the novel coronavirus. 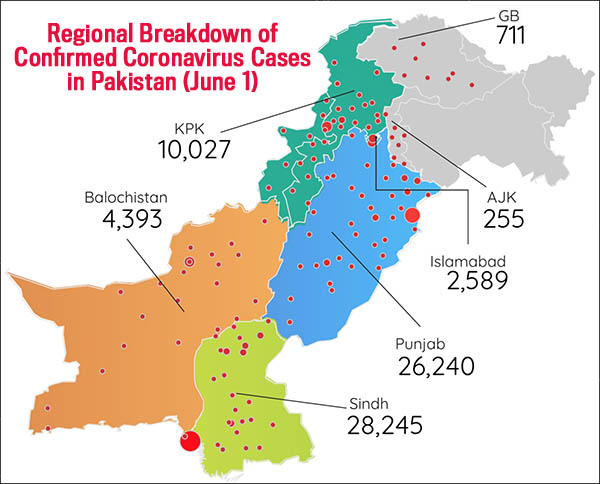 There are currently 6,642 active cases of coronavirus in the province.

Chief Minister Jam Kamal Khan on Sunday clarified that the province had opted against the “smart lockdown” measures proposed by Prime Minister Imran Khan, as it thought imposing the lockdown across the province was a more effective strategy. “All our districts are under control,” he told a private broadcaster.

Overall, there are currently 4,393 confirmed cases of the novel coronavirus in the province, with 47 deaths and 1,507 recoveries. It currently has 2,839 active cases of COVID-19.

Islamabad on Sunday issued a notification imposing a Rs. 3,000 penalty on any citizens who refuse to wear face masks in public places. The federal capital is the first district to impose such a penalty, as its confirmed COVID-19 infections have risen to 2,589, with 28 deaths and 169 recoveries. Presently, the Islamabad Capital Territory has 2,392 active cases of the novel coronavirus.

In Gilgit-Baltistan, cases of the novel coronavirus rose to 711. Overall, it has thus far reported 11 deaths and 496 recoveries, leaving 204 active cases.

In Pakistan-administered Kashmir, confirmed cases have increased to 255. It has also reported 6 deaths and 168 recoveries, leaving 81 active cases of the virus.

Globally, the virus has now infected more than 6,267,400 people, with over 373,950 reported deaths. Governments across the world have halted flights, locked down towns and cities and urged people to stay at home, but there are signs of easements to help shuttered economies recover. Overall, around 2,847,530 patients of the 6.2 million+ infected have recovered thus far.