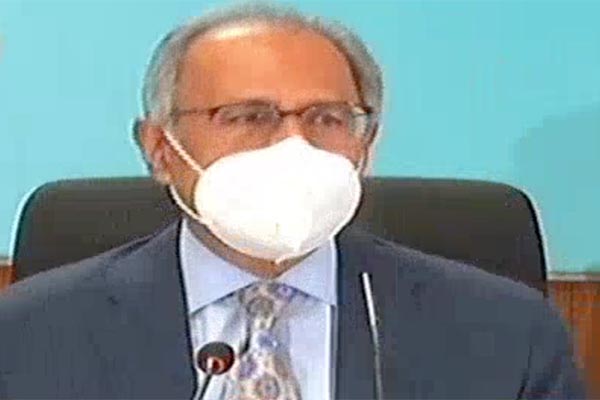 The provisional GDP growth rate for fiscal year 2020 is estimated to have contracted to -0.38 percent due to the impact of the coronavirus pandemic on the country’s economy, Special Assistant to the P.M. on Finance Abdul Hafeez Sheikh said on Thursday.

Releasing the 2019-20 Economic Survey to the public, the de facto finance minister blamed the “changed situation” due to the coronavirus pandemic for a less-than-predicted tax collection, noting it had declined after showing a 17 percent growth rate. “We were confident to reach the Rs. 4.8 trillion collection target but the situation has changed due to coronavirus. We expect that when things change and people are better off, they will pay their taxes,” he said.

He said that the government would not aggressively pursue tax collection this year due to the COVID-19 pandemic, but still expected people to continue paying what they could in the months to come. The government’s target for tax collection in fiscal 2020-21 per local media is Rs. 4.95 trillion, in excess of the revised target it had set for itself last year.

Earlier, Shaikh reiterated the government’s claims that the country had been on the verge of bankruptcy when the Pakistan Tehreek-e-Insaf came into power. “The country was witnessing growth on loans that were secured from abroad,” he said, adding that the government had sought to cut its expenditures while increasing public spending.

Shaikh claimed the government had not taken any loans from the State Bank of Pakistan in the past year, nor had it provided any supplementary grant to government departments, as it wanted to ensure public money was spent responsibly. He said the government’s policies had resulted in a stable exchange rate, healthy growth in foreign direct investment, improved ranking in World Bank’s Ease of Doing Business Index, and a ‘stable’ credit outlook to B3 from ‘negative’ by Moody’s.

According to the survey, the provisional Gross Domestic Product (GDP) growth rate for FY2020 has been estimated at -0.38 percent on the basis of 2.67, -2.64, and -0.59 growth in agricultural, industrial and services sectors, respectively. “For FY2020, the negative performance of both industry and services overshadowed the growth in the agriculture sector,” it said, adding that services sector was most impacted by COVID-19 lockdowns.

Listing international support in the wake of the COVID-19 pandemic, the report said the International Monetary Fund had given a one-year relief to Pakistan amid the pandemic and $1.386 billion were given under the Rapid Financing Instrument to address its economic impact. “Aid packages from Asian Development and the World Bank, along with inclusion by G20 in their debt relief program, will enable the economy to greatly make up for the projected loss,” it said, adding that as the economy slowly reopened, it was expected that the adverse impact of COVID-19 would “bottom out.”

The report said that provisional growth in industrial sector has been estimated at -2.64 percent mainly due to a negative growth of 8.82 percent in mining and quarrying sector and decline of 7.78 percent in large-scale manufacturing sector.

Blaming COVID-19 once again, it said growth estimates of small-scale industry for FY2020 had reduced to 1.52 percent.

Finance and insurance sector, meanwhile, witnessed a slight increase of 0.79 percent with housing services, general government services and other private services have contributed positively at 4.02, 3.92 and 5.39 percent, respectively.

Noting the Pakistani rupee had depreciated by 3.9 percent during July-March FY2020, it said this had increased cost structure of industries. “Furthermore, policy rate was kept high to contain inflation which discouraged investment. Subdued demand further hampered the overall production and performance of the industry,” it added.

Total expenditures, meanwhile, grew by 15.8 percent, with the current expenditure posting 16.9 percent growth in nine months “on account of higher mark-up payments, grants for social spending and expenditures on social protection.” Overall, it states, Public Sector Development Program expenditures grew by 24.9 percent in the past year.

According to the survey, inflation in Pakistan peaked at 14.6 percent in January 2020, but was brought down to 11.2 percent for July-April against 6.5 percent during the same period last year.

The report also highlighted that between July-March FY2020, current account deficit had reduced by 73.1 percent to $2.8 billion compared to $10.3 billion last year.

According to the Ministry of Telecommunications, 7 million SIM Cards and 10,000 Banking Cards are being imported into Pakistan every month. The survey states that there has been a consistent growth in IT and IT-enabled services’ remittances over the last 5 years, with a compound annual growth rate of 19.5 percent, the highest of all industries in the country. “Pakistan’s IT&ITeS exports have crossed $4.1 billion during FY2019 with export remittances nearing $1 billion,” it says.

During the first two quarters of FY2020, telecom sector contributed Rs. 142 billion to the national exchequer. “Annual revenues from telecom sector have reached an estimated Rs. 551.9 billion during FY2019, up from Rs. 440 billion last year, registering an annual growth of 12.9 percent,” it added.

The Economic Survey has warned that if the country adopts limited restrictions to curb spread of coronavirus, around 1.4 million jobs will be lost due to COVID-19; under moderate restrictions losses could reach 12.3 million; while 18.53 million people would be unemployed in case of a complete shutdown. The survey did not mention the length of the shutdowns under consideration.

Concluding the report, the Economic Survey reiterates Prime Minister Imran Khan in that the government must now contain the spread of the COVID-19 pandemic and mitigate the socioeconomic losses to “protect the most vulnerable.” Therefore, it said, “prime focus areas of the government are health, social safety, industry, farming, trade etc.”