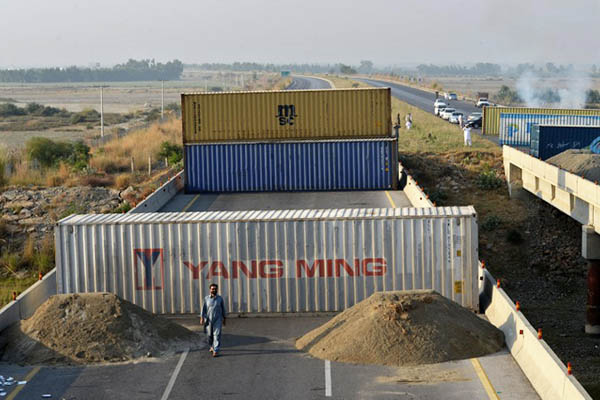 The government had confiscated thousands of shipping containers—and their contents—to block protests.

Pakistani business leaders complained on Wednesday of losing millions of dollars to the government’s method of containing protesters: by confiscating thousands of shipping containers, many still full of goods, to block roads.

Transport operators complained that up to 4,000 containers had been diverted from their usual route between Karachi and Islamabad to block the capital’s roads this week, as opposition leader Imran Khan threatened a million-strong demonstration to lock down the government.

By Tuesday Khan had called the protest off, but the containers—many carrying medicines, perishable goods and other costly cargo—had not yet been returned. “A great injustice is being done to us as authorities have seized more than 4,000 containers carrying goods,” said Chaudhry Saeed Iqbal, vice chairman of the Karachi-based Pakistan Transport Federation.

Zafar Bakhtawri, vice president of the Pakistan Chambers of Commerce and Industries, estimated the losses at “millions” of dollars. He pointed out that the move also brings factories, where storage space is limited when production cannot be shipped out, to a halt.

Babar Chaudhry, a local transport operator, said he had to pay fines each time his shipments fall behind schedule. “We have been urging government and held several meetings with authorities… but so far they have not stopped this practice,” Chaudhry told AFP.

The sight of containers in the streets have become an ubiquitous sign of stirring unrest in major cities since the tactic was first used in Karachi in 2007. Then, the government of then president Pervez Musharraf sealed the megacity with containers to stop sacked chief justice Iftikhar Muhammad Chaudhry from addressing fellow lawyers.

The next “containerization,” as the tactic is becoming known, came later that same year, when current Prime Minister Nawaz Sharif tried to return from exile in Saudi Arabia. He landed at Islamabad airport but was deported immediately on a special plane. Rawalpindi, where Islamabad airport is situated, was locked down with containers in preparation.

Since then containers have been freely used to control crowds, even those on routine religious marches.

Containers are also used to create stages at political rallies and temporary residences and offices for leaders—though in those cases they are usually paid for by the parties concerned. In 2014 Imran Khan joined forces with populist cleric Tahirul Qadri to bring thousands of protesters to Islamabad for a sit-in outside Parliament. The pair turned the government’s use of containers on its head: first, by embracing them as mobile offices, each having their own fully-equipped air-conditioned container with toilets, WiFi and television.

They also brought their own cranes and simply removed containers—even those filled with earth and sand—positioned by authorities to block their path to the high-security Red Zone in front of Parliament House.