Home Lightbox Pakistan Should Stay Out of Yemen

Pakistan Should Stay Out of Yemen 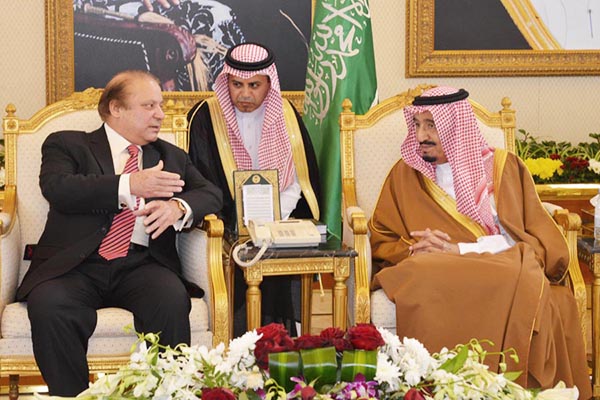 Becoming a part of a Saudi-led coalition will be stupidity at its most stupid.

“The U.S. has confirmed its support for an extraordinary international military alliance that is emerging to counter Houthi rebel advances in Yemen.

“As Saudi Arabia began pounding the rebels with airstrikes, countries from the Middle East to Pakistan were said to be prepared to commit troops for a ground assault.

“The U.S. was providing ‘logistical and intelligence support’ to the Saudi-led forces attacking the rebels, the White House announced. Meanwhile the Saudi-owned Al Arabiya news channel said the kingdom had lined up 150,000 soldiers in preparation for a ground offensive, with Egypt, Pakistan, Jordan and Sudan also ready to commit troops.”

The same day, an AFP/Reuters report in Pakistani newspaper Express Tribune, captioned, ‘Saudi says Pakistan wants to join fight against Yemen rebels,’ had this to say on the issue:

“Saudi Arabia said Thursday that five Muslim countries including Egypt and Pakistan want to participate in the Gulf-led military coalition against Houthi rebels who have seized large swathes of Yemen.

“Together with Jordan, Morocco and Sudan, they have ‘expressed desire to participate in the operation’ against the rebels, which the kingdom dubbed ‘Firmness Storm’, Saudi SPA state news agency said.”

While reports suggest that the United States and the United Kingdom are supporting Riyadh’s decision to take military action, Iran has come out strongly, and expectedly, against airstrikes and any putative ground offensive by the Saudi-led coalition, calling it “a dangerous step” that violates “international responsibilities and national sovereignty.”

Iran’s foreign ministry spokesperson, Marzieh Afkham, has said that the military action will “further complicate the situation, spread the crisis and remove opportunities for a peaceful resolution of Yemen’s internal differences.”

Sources in the Ministry of Foreign Affairs told this writer that so far Islamabad has taken no decision and what is being said or written is pure speculation. However, it is a matter of record that the Saudi Crown Prince called the prime minister, Mian Nawaz Sahrif, on the night of March 25 and made this request. Other sources in the government say that the Saudi request related to committing elements of Pakistan Air Force and there’s no consideration at the moment for inducting ground troops. A lot of pressure is also being mounted by leaks to channels like Al-Jazeera and Al-Arabiya.

Be that as it might, it is a request that Islamabad should, and must, decline. It has been our stated policy, and for sound reasons, to not send our troops in harm’s way on a foreign soil. Pakistan does contribute troops to U.N. Peacekeeping Missions and has earned plaudits for its role in various conflict areas in the world, ranging from Europe to Africa. But those missions are conducted under the U.N. auspices. It is one thing to help keep peace within the U.N./multilateral framework and quite another to assume a combat role on foreign soil.

That would be unwise even at the best of times. As it happens, these are not the best of times with the Pakistani military already stretched thin and stressed. Also, Middle East is a morass. Try a flow chart of who is supporting whom in the various conflicts raging there and one can figure out the absurdities that have taken hold of the region. Even Cardinal Richelieu will have a hard time getting his head around it and that says something about what’s happening in the region.

That said, there’s yet another dimension and that comes right back to Pakistan like a boomerang: the Sunni-Shia divide that is playing out and unfolding in the Middle East and whose poison we have had to put up in this country in the form of Deobandi-Salafi terrorist groups apostatizing and attacking Shias in this country with great abandon. Any decision by Islamabad to enter a conflict with overt sectarian biases will only bring the consequences of this menace back to us. It will be stating the obvious that that is not something we can afford.

A likely counter-argument to this would be by some to cite our ‘close’ relations with Riyadh and the assistance we can and have been getting from them in our time of need. This would be a valid argument if the consequences of doing Riyadh’s bidding would not be so dire. Riyadh is locked in a mortal combat with Tehran to the point where enough evidence has emerged of the fact that it is prepared to support and fund an Israeli strike on Tehran’s nuclear facilities. The question is: would we also want to be part of any such support or coalition led by KSA if Riyadh were to ask us for it? Do we really want to be sucked into—I ask this as a Realist—a conflict between Riyadh and Tehran which is unfolding in Iraq, Syria and, yes, even Gaza?

Strategy is about increasing one’s options, not reducing them by putting our eggs in one basket. Iran is contiguous to us. It hasn’t been much of a support in our interests against India. But that’s equally true of KSA. Contiguity means we have to live with Iran, cooperating as well as, where and when required, neutralizing Tehran’s ambitions. Yet, any such policy must be of our own making and choosing and must not be grounded in the interests of Saudi Arabia, as is the case now.

The ruling PMLN’s leader, Mian Nawaz Sharif, is very close to the Saudi royal family. The Sharif family probably also have business interests on Saudi soil. That said, any policy must take into account Pakistan’s interests, not that of the Sharif family. I am not an economist but some of our eminent economists are on record as saying that our need for foreign assistance has more to do with our penchant for squandering our resources through poor governance and terrible policy decisions than any intrinsic requirement for carrying to Riyadh or Washington what is popularly called the ‘begging bowl’.

The real challenge is to try and play a positive role in the conflict and that requires presenting oneself as an honest player. Honesty in inter-state relations does not mean there are no interests involved. But it does mean that the two sides should trust you. This is important also because we have interests tied in with both Riyadh and Tehran and we cannot afford to be seen as playing one side against the other.

Yemen may be Riyadh’s core interest. It is not ours. And we cannot continue to conduct foreign policy on the basis of personal chemistry or because we cannot get rid of our begging bowl since we are hell-bent on self-destructing.