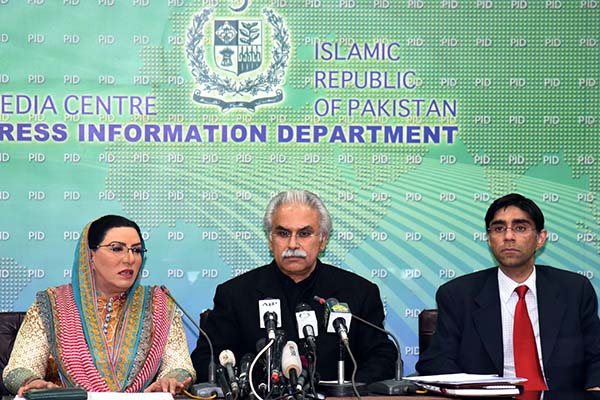 Series of preventative measures include ban on public gatherings and closure of western borders for two weeks, limited international flights

A National Security Committee (NSC) meeting on Friday announced a raft of measures designed to contain the spread of novel coronavirus in Pakistan, as the total number of confirmed cases of COVID-19 in the country climbed to 28.

The NSC decided to close Pakistan’s borders with Afghanistan and Iran “completely” for two weeks, said Mirza, adding that the systems for screening and preventing further infections from entering the country would be improved in this period. He said a decision had also been taken to allow only three airports in the country—Karachi, Islamabad and Lahore—to operate international routes, thereby reducing entry points and ensuring better screening measures.

According to the de facto health minister, all large public gatherings, including weddings and conferences, had been banned for two weeks. The ban applies on movie cinemas, and would also be reflected in the ongoing Pakistan Super League with no live audiences permitted in any of its remaining matches.

To a question on religious public gatherings, including Friday prayers and the Tablighi Jamaat currently underway in Raiwind, Mirza said the matter had been referred to the religious affairs minister and the chairman of the Council of Islamic Ideology, who would consult with stakeholders before advising the government on whether or not any action was required.

The special assistant to the P.M. said the government would request the Chief Justice of Pakistan to shut civil courts and adjourn all cases for three weeks. Judicial magistrates and judges of sessions courts would be requested to decide criminal cases within jails, while there would be no visitation of prisoners allowed for three weeks, he added.

Meanwhile, Foreign Minister Shah Mehmood Qureshi told Dawn News that the NSC had also decided to cancel the March 23, Pakistan Day, parade. Separately, Education Minister Shafqat Mahmood posted on Twitter that all educational institutions in the country, including daycare centers and madrassas, would be shut until April 5; he said the situation would be reviewed on March 27 and a revised decision issued if deemed necessary.

Per Mirza, the NSC decided to form a National Coordination Committee for COVID-19. It also decided to make the National Disaster Management Authority the operational agency to lead the fight against the crisis.

Also on Friday, Mirza said he wanted to end speculation on the coronavirus cases reported in Pakistan thus far: “I can confirm that Pakistan has 28 cases of coronavirus,” he said, explaining that the seven new cases had all been reported from Taftan, where Pakistani pilgrims have been returning from Iran, which has reported over 500 deaths from the virus in the past month.