Pakistan on Monday continued its nearly weeklong streak of recording more than 4,000 new infections per day, as the country crossed 100,000 confirmed cases of the novel coronavirus.

The country, which “must learn to live with it [the virus]” according to Prime Minister Imran Khan, recorded 4,728 new infections against 22,650 tests—a positive ratio of 20.87 percent—raising confirmed cases to 103,671.

There are currently 67,249 active cases of the coronavirus in the country, with the National Command and Operation Center reporting 1,382 of those are in critical condition.

Special Assistant to the P.M. on Health Dr. Zafar Mirza told a news conference on Sunday that wearing face masks could reduce the chances of contracting the coronavirus by 40 to 50 percent. “We have [now] reviewed our guidelines a third time and are suggesting that provinces should take action against [all] those who don’t wear masks. However, we leave it to the provinces what kind of action they want to take,” he said.

A multi-party conference, comprising the opposition’s PPP, PMLN, the PMLQ, Jamaat-e-Islami, Awami National Party and Barabri Party has demanded the provincial government “impose a three-week strict lockdown in Lahore, Gujranwala, Gujrat, Rawalpindi, Faisalabad and Multan” to curb the spread of the coronavirus as it continues to sweep across the country’s most populous province.

On Monday, authorities reported 32 new deaths due to COVID-19, raising total fatalities to 715. The province also reported 1,813 new infections, raising confirmed cases to 38,903, against 8,109 recoveries. There are now 30,079 active cases of the virus in Punjab province.

Chief Minister Murad Ali Shah on Sunday warned the infection rate of the novel coronavirus was continuing to increase because people were not complying with the SOPs provided by the government. “The situation is going from bad to worse, and we all have to respond to the situation responsibly,” he said.

The total number of confirmed COVID-19 cases in the province on Monday morning rose to 38,108. Additionally, the province’s death toll climbed by 16 to 650, while its recoveries rose to 18,776. Overall, the province now has 18,682 active cases of the novel coronavirus, exhibiting a recovery rate of 50 percent.

The provincial government issued a notification on Sunday barring people from access to public hospitals if they did not wear face masks as part of preventative measures to curb the spread of COVID-19.

Adviser to the C.M. on Information Ajmal Wazir, announcing the measure, claimed the province was reporting all cases and deaths as per World Health Organization guidelines.

There are currently 9,370 active cases of coronavirus in the province. 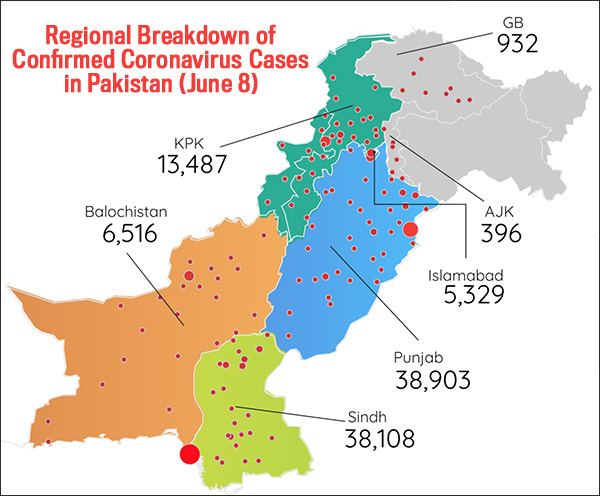 The provincial government on Sunday issued a notification allowing public transport to resume—several weeks after the other three provinces had taken the same decision. According to the notification, transporters would have to spray disinfectants in buses and ensure every second passenger seat remains empty. Every passenger would also be checked using thermal scanners before boarding public transport, and people without face masks or those exhibiting coronavirus symptoms would not be allowed to travel, added the notification.

Any violation of the SOPs would result in action against the transporters as well as passengers, with the potential for all public transport to be suspended once again, the notification warned.

Overall, confirmed cases of the novel coronavirus in the province rose by 295 to 6,516, with no new deaths, sustaining 54 deaths due to the disease. Overall, 2,313 patients have recovered from the deadly virus, while there are currently 4,149 active cases of COVID-19.

On Monday, the Islamabad Capital Territory raised its confirmed coronavirus infections by 350 to 5,329, with 3 new deaths raising the death toll to 52. Overall there have been 843 recoveries, leaving 4,434 active cases of COVID-19.

Confirmed cases of the novel coronavirus in Gilgit-Baltistan rose by 5 to 932 on Monday morning. Overall, the region has thus far reported 13 deaths and 577 recoveries, leaving 342 active cases.

In Pakistan-administered Kashmir, confirmed cases increased by 35 to 396. In the past 24 hours, the region has reported no new deaths and 5 recoveries, leaving 8 total deaths and 195 recoveries. There are now 193 active cases of the coronavirus in the region.

Globally, the virus has now infected more than 7,091,634 people, with over 406,190 reported deaths. Governments across the world have halted flights, locked down towns and cities and urged people to stay at home, but there are signs of easements in nations that have reined in the virus’ spread to help shuttered economies recover. Overall, around 3,461,060 patients of the 7 million+ infected have recovered thus far.