Pakistan Still Among Most Dangerous Countries for Journalists 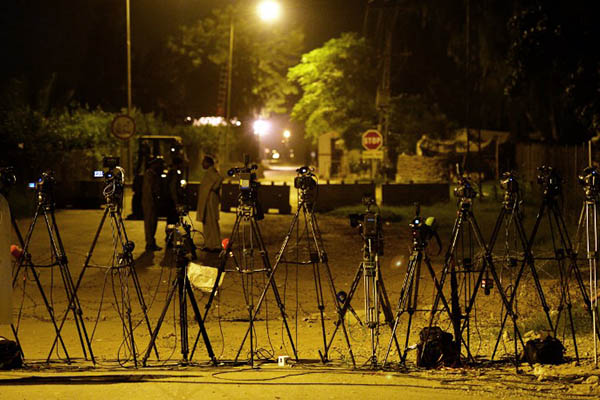 Annual report issued by media watchdog Reporters Without Borders ranks Pakistan as 158 out of 180 on its Press Freedom Index.

Pakistan remains one of the most dangerous countries in the world for journalists, media watchdog Reporters Without Borders (RSF) said in its annual report released Wednesday, citing Balochistan province as a hotspot for violence.

Seven reporters were killed in the line of duty in 2013, the report said, blaming the government’s “unwillingness to administer justice.” By comparison, 10 journalists were killed in Syria, eight in the Philippines and seven in Somalia.

Placing Pakistan as the 158th country out of 180 on its Press Freedom Index, the report noted: “The government appears powerless in the Taliban … and the military establishment, which is known as a ‘state within a state’ among many international observers.”

Four of the deaths occurred in Balochistan, which is wracked by Islamist violence and a long-running ethnic separatist insurgency. Cameraman Imran Shaikh and his colleague Saif-ur-Rehman were among those killed after rushing to cover a bomb, which hit the provincial capital of Quetta in January 2013. Both men died after being hit by a second blast that occurred 10 minutes after the first.

Shaikh’s widow, Shazia Bano, said the family lived in constant threat, but he continued his work regardless. “He was not scared and used to say that it is our job and we have to do it … I used to force him to quit his job as journalist but he replied, what I should do if I quit?”

While Shaikh and Rehman were caught up in militant violence, other journalists fall victim to the powerful interests linked to the government or intelligence agencies. Riaz Baloch, another Baloch journalist who published a story about a pro-government figure linked to a car theft operation, said he was kidnapped, tortured, and detained for nearly 60 days. “They took me to mountains … where I was subjected to severe torture and I was asked … why I published the news.”

Pakistan’s Constitution theoretically protects freedom of speech, and the media is seen as having taken great strides in recent years. But certain subjects, particularly criticism concerning the Army and spy agencies, remain taboo. Last year Pakistan was placed 159 out of 179 countries in the index, with nine journalists killed.