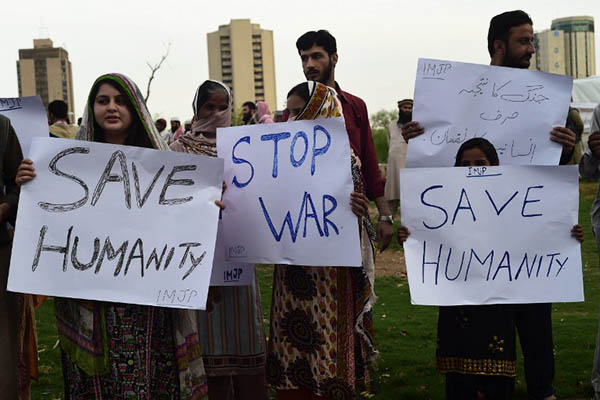 Demonstrators in Islamabad protest against the war in Yemen. Farooq Naeem—AFP

Analysts say Islamabad will find it hard to deny Saudi Arabia’s request for military aid due to longstanding financial ties.

Pakistan faces an unenviable dilemma—whether to join a Saudi Arabia-led coalition fighting Shia Houthi rebels in Yemen or stay out and risk angering its old ally, which provides it with huge financial support.

Pakistan, currently the Islamic world’s only nuclear power, has provided military aid and expertise to the Gulf kingdom for decades and enjoyed cheap oil and massive financial help in return.  In addition, Prime Minister Nawaz Sharif has close personal ties to the Saudi royal family, so Pakistan might have seemed like an obvious candidate to join the coalition of Arab states.

But the government has held back, in part because it finds itself torn between its old ally and its neighbor, Iran, the major Shia power, which is furious at the Yemen assault.

Islamabad says it will defend Saudi “territorial integrity” but insists no troops or equipment have been sent yet and maintains Pakistan will not take part in any conflict that divides the Muslim world along sectarian lines.

The coalition fight to end the Houthi rebels’ uprising against President Abedrabbo Mansour Hadi has sent tensions between the Sunni Arab coalition and Shia Iran soaring. Sectarian violence has soared in largely Sunni Pakistan in recent years, most of it targeting Shias, who make up 20 percent of the population.

Military ties between Saudi Arabia and Pakistan date back to the 1960s, when Islamabad helped Riyadh build up its air force and supplied pilots to fly sorties against a South Yemeni incursion into the kingdom in 1969, U.S. security expert and former CIA officer Bruce Riedel wrote in a Brookings Institution article. In the 1980s Riyadh, along with the U.S., funneled vast sums of money through Pakistan to fund the Afghan mujahideen fight against Soviet occupation.

Cooperation and financial assistance has continued to flow from Riyadh, in the form of cheap oil and loans, including one of $1.5 billion last year. When Sharif was ousted in a military coup in 1999, it was Saudi Arabia that received him in exile. But despite this history, there has been considerable resistance in Pakistani media this week to joining what is seen by many as a “foreign” war, with a bitter fight against terror outfits still going on at home.

The military is busy with a major operation against Pakistani Taliban hideouts in the tribal northwest, on top of maintaining a heavy presence along the border with India, and some argue its resources are too stretched to contribute in Yemen.

“Nawaz Sharif knows the military is totally tied up, a third of its strength is tied up in FATA, Pakistan is not in a position to make any troop contribution,” said Rifaat Hussain, a leading Pakistani analyst and university professor.

Moreover the military is likely to be wary about committing troops to any future ground operations in Yemen, which would likely be messy and difficult. “Pakistan is very aware it is a tribal war, a tribal conflict, even though it has taken on a Sunni-Shia aspect and we don’t want to muddy the waters by getting into this conflict unthinkingly,” Hussain said.

The government has dispatched a high-level delegation to Riyadh to assess the situation, but it is not clear how quickly this might produce a decision from Islamabad on joining the Saudi coalition.

Pakistan will be reluctant to anger Iran more than it can avoid, given Tehran’s history of supporting proxy militant forces around the region. But faced with a struggling economy and energy crisis, Pakistan will also find it hard to say no to the Saudis.

It is not clear what consequences an outright refusal would bring for Pakistan, though Saudi might consider cutting back on aid and the cut-price oil it provides.

And of course history is on the Saudis’ side: Pakistani forces went to help protect the kingdom in the 1970s, 1980s and 1990s. “At no point, ever, has a Pakistani military resisted going to Saudi Arabia,” said security expert Ayesha Siddiqa.