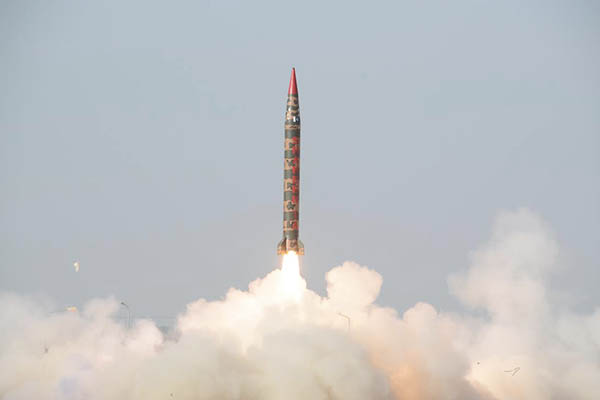 Shaheen 1A surface-to-surface ballistic missile can carry nuclear and conventional warheads with a range of 900km.

Pakistan test-fired a ballistic missile capable of carrying a nuclear warhead on Tuesday, its second test in three days and barely a week after the government confirmed it would resume high-level peace talks with rival India.

The test is the latest in a series carried out by India and Pakistan since both demonstrated nuclear weapons capability in 1998. The military said it had fired a Shaheen 1A surface-to-surface ballistic missile, which can carry nuclear and conventional warheads within a range of 900 kilometers.

“The flight test was aimed at re-validating several design and technical parameters of the weapon system. Shaheen1A is capable of delivering different types of warheads to a range of 900 kilometers,” a statement said. Later, a security official confirmed to AFP that the missile could also carry nuclear warheads.

Relations between Pakistan and India, which have fought three wars since independence from Britain in 1947, have always been fraught, but soured further last August amid a rise in clashes along their borders and a row over a Pakistani diplomat meeting Kashmiri separatists. Last week, India’s foreign minister Sushma Swaraj held talks with her Pakistani counterpart Sartaj Aziz in Islamabad on the sidelines of a regional summit on Afghanistan, where they jointly announced they would resume high-level peace talks.