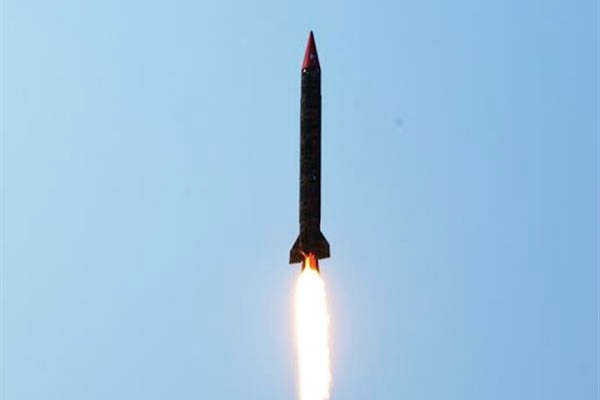 The Ghauri missile has a 1,300km range and can carry both conventional and nuclear warheads.

Pakistan on Wednesday test-fired a ballistic missile capable of carrying a nuclear warhead, the military said.

The Ghauri Ballistic Missile has a range of 1,300 kilometers and can carry both conventional and nuclear warheads. It came a month after tests of the surface-to-surface nuclear-capable Shaheen III missile with a range of 2,750 kilometers.

“The training launch of the Ghauri missile system was aimed at testing operational and technical readiness,” the military said in a statement.

Pakistan and neighboring India, which have fought three wars since independence from Britain in 1947, have routinely carried out missile tests since both demonstrated a nuclear weapons capability in 1998.

Tensions are higher than normal after Pakistani authorities last Friday freed on bail Zaki-ur-Rehman Lakhvi, the alleged mastermind of the 2008 Mumbai attacks. The move was furiously condemned by India and denounced by the United States and France.

The release followed nearly four months of wrangling over Lakhvi’s detention after a judge granted him bail in December. Pakistan’s government slapped Lakhvi with a series of detention orders but judges repeatedly cancelled them.