Home Latest News Pakistan to do Utmost for Peace in Afghanistan: Imran Khan

Pakistan to do Utmost for Peace in Afghanistan: Imran Khan 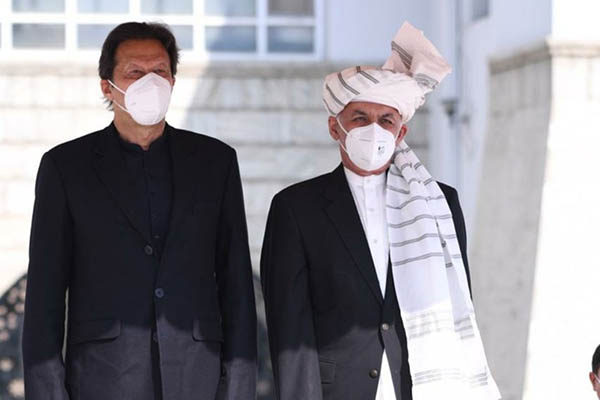 In maiden visit to Kabul, prime minister says objective of his visit is to build trust and communicate more effectively

Pakistan will do whatever it can to help reduce violence in Afghanistan, Prime Minister Imran Khan vowed on Thursday during his first visit to the war-torn state since assuming office.

“The whole idea of [my] coming at a time when violence is increasing in Afghanistan is to assure you that we, the people and the Government of Pakistan, have only one concern: that we want peace,” he said. “We feel the people of Afghanistan have suffered for four decades, and if ever a human community needed peace, it is Afghanistan,” he added.

Recalling that Islamabad had played its role in convincing the Taliban to first talk to the Americans, and then the intra-Afghan dialogue, he said it had been a matter of great concern that this had not resulted in any reduction in extremist violence. “My idea of choosing this time to come was to assure you that Pakistan will do everything, whatever is possible, to help reduce this violence and move toward a ceasefire,” he said.

Khan said both sides had formed committees to keep the lines of communication open and to allow security agencies to effectively keep in touch. “Whenever you feel that there is somewhere Pakistan can help in reducing the violence, please let us know,” he said. “Whatever is possible within our grasp, we assure you we will be doing our utmost to reduce this level of violence,” he added.

“Pakistan is the country, after Afghanistan, which is most interested in peace in [your country],” he said. Referring to the tribal areas of Pakistan, the ex-FATA region, he said the region had been devastated by the war on terror. “Billions in rupees in damage was done there,” he lamented, saying the best way to help people on both sides of the shared border was with trade and connectivity.

“We hope that this trade and connectivity will increase between the two countries and for this reason peace is imperative,” he said.

The prime minister thanked Afghan President Ashraf Ghani for his invitation to visit Kabul, saying he had been planning to visit Afghanistan for 50 years but had been unable to do so before now. He said the favorite place for Pakistanis to visit in the ‘60s and ‘70s was Kabul, and recalled how so many Afghans used to visit Peshawar at the same time. “We have historical links, connections, relations between our two countries,” he stressed.

Earlier, the Afghan president said he and Khan had a common desire to eradicate poverty, and empower citizens within the frameworks of the Islamic constitutions of both nations. “Respect for our Prophet (PBUH) is in the blood, in mind of every Muslim, and over a thousand years of review of our literature, there is nothing but respect,” he said. “I’d like to thank you and I assure you of our cooperation in making sure that our occidental counterparts understand that positive freedom and negative freedom are different,” he said, stressing that negative freedoms can hurt other people’s sentiments.

“Violence is not an answer. A comprehensive political settlement for an enduring peace within the framework of our values, in Islamic republics, is the way to the future,“ he said, adding inclusive politics of engagement is the way to the future. “We have agreed to form committees to deal with key topics to make sure that the foundation for trust that has been established with your trip today becomes an enduring process,” he said. He also thanked Khan for visiting Afghanistan and said he would be glad to take up his invitation to visit Pakistan.

Prime Minister Imran Khan visited Afghanistan on a daylong trip on the invitation of President Ashraf Ghani. He accompanied by the foreign minister, the adviser for commerce and investment, and other senior officials. According to a statement issued by the Foreign Office, the focus would be on further deepening the fraternal bilateral relations between Pakistan and Afghanistan, the Afghan peace process, and regional economic development and connectivity.