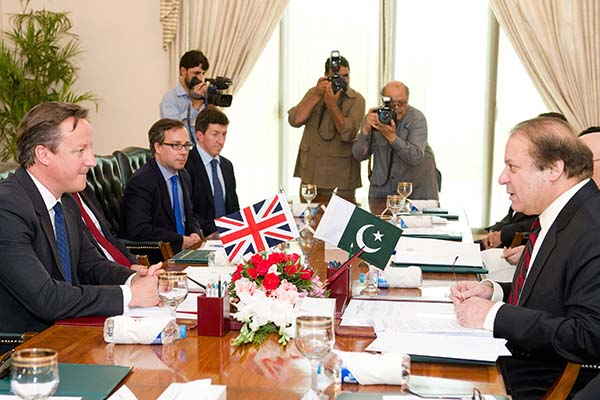 Pakistan assured Britain’s visiting prime minister on Sunday that it would promote peace efforts in neighboring Afghanistan as the West pushes for talks with the Taliban ahead of NATO’s withdrawal next year.

David Cameron’s talks in Islamabad were conducted as four attacks in northwest Pakistan killed at least 55 people, underscoring the Islamist militant violence plaguing both sides of the Afghan border.

Cameron’s two-day visit to Afghanistan and Pakistan was part of a Western push to end a 12-year Taliban insurgency after recent efforts to start peace talks collapsed in ignominy over the manner in which the militants opened an office in Qatar on June 18. The West considers Pakistani support vital to any peace deal in Afghanistan although relations between Kabul and Islamabad are traditionally mired in distrust.

Apparent headway between Pakistani President Asif Ali Zardari and Afghan leader Hamid Karzai at a summit hosted by Cameron in February has since unraveled in a series of public rows.

“We hope that the U.K. will continue these efforts to seek sustainable peace and stability in Afghanistan,” said new Pakistani Prime Minister Sharif after meeting Cameron. He echoed Karzai’s position that any peace process should be “Afghan-owned and Afghan-led.” Karzai is hostile to any contacts with the Taliban that sidestep his administration in Kabul.

“I have assured Prime Minister Cameron of our firm resolve to promote the shared objective of a peaceful and stable Afghanistan, to which the three million Afghan refugees currently living in Pakistan can return with honor and dignity,” said Sharif.

Cameron said he welcomed Sharif’s remarks about the “vital importance of the relationship between Pakistan and Afghanistan.”

The search for a peace deal is an urgent priority as 100,000 U.S.-led NATO combat troops prepare to withdraw next year and Afghan forces take on the fight against insurgents.

The Taliban office in Qatar that opened on June 18 was meant to foster talks but instead enraged Karzai, who saw it as being styled as an embassy for a government-in-exile. He broke off bilateral security talks with the Americans and threatened to boycott any peace process altogether.

On Sunday the Afghan government said the security talks with the U.S., over a pact that would allow some troops to stay in Afghanistan after 2014, “can resume when the talks between the [High Peace Council] and the Taliban begin.”

But the Taliban has consistently refused to meet the HPC, the official negotiators of the Afghan government, saying Karzai is a puppet of the United States.

Cameron is the first head of government to visit Pakistan since Sharif took office in June. He congratulated Sharif on his victory in the May 11 polls and called the transition of democratic power “something of a golden moment for Pakistan and for her people.”

Both sides pledged to increase trade between Britain and Pakistan to a target of $4.56 billion by 2015. Sharif has inherited a raft of massive problems, not least a moribund economy and a desperate energy crisis. He told Cameron his government was taking “austerity measures … to ensure fiscal discipline and address the challenge of energy shortages” and welcomed British development and trade.