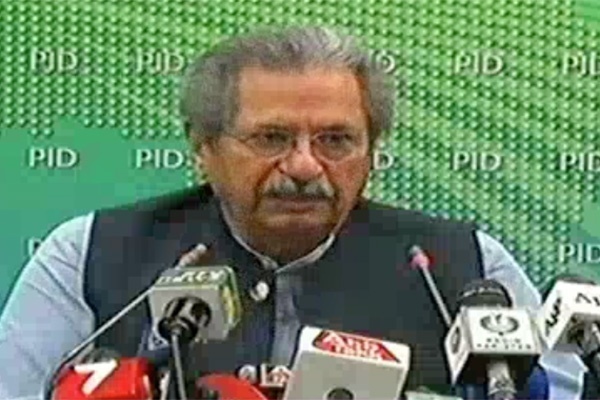 The federal and provincial governments on Monday decided to reopen educational institutions for in-person classes in three phases, with federal Education Minister Shafqat Mahmood announcing that students of grades 9-12 would be the first to return to class from Jan. 18.

“We will never compromise on the health of our children,” Mahmood stressed, adding that the decisions taken in today’s meeting would be reviewed in another meeting on either Jan. 14 or Jan. 15 to ensure that the downward trajectory of the second wave of the novel coronavirus was progressing in a satisfactory manner. “That meeting will determine if we need to take any more precautionary measures,” he said.

According to the education minister, the administrative staff and faculty of all schools and colleges would be allowed to return to their institutions after the government-designated winter break ended on Jan. 10. “Home-based learning, where available, can also resume from Jan. 11,” he added.

On the issue of national exams, which were scheduled for March and early April, Mahmood said that the government had decided to postpone them until May or June. “This would allow students time to complete their course-work,” he said.

Earlier, Special Assistant to the P.M. on Health Dr. Faisal Sultan said that while all the government’s preventative measures had helped to curb the spread of COVID-19’s second wave, the “largest visible impact” was seen from the closures of schools and higher educational institutions. “When we examined the data from the second wave, the closure of schools had the greatest impact on slowing down the spread of the pandemic and giving us time to properly cope with it,” he said.

“However, the second wave is still ongoing,” he stressed. “We must continue to take care for some more time [to ensure our healthcare infrastructure] doesn’t get overwhelmed,” he said, adding that we need more clarity on the progress of the second wave before we can take any final decisions on ongoing preventative measures.

Pakistan on Monday reported 1,895 confirmed cases of the novel coronavirus after conducting 30,139 tests, a positivity ratio of 6.29 percent. The country’s total death toll from the pandemic has now hit 10,350, while the number of patients who are in critical condition has been hovering above 2,200 for over two weeks. Last week, the Sindh Health Department also confirmed that it had discovered five cases of a more infectious strain of COVID-19 among U.K. returnees, raising fears of a boost in transmission if quarantine is not strictly enforced.