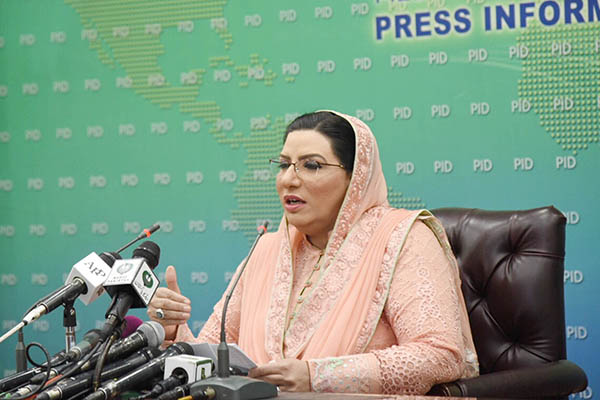 Pakistan’s federal cabinet on Tuesday decided to send chloroquine tablets, believed to be helpful in treating cases of coronavirus, to “friendly nations” during their time of need, Special Assistant to the P.M. on Information Firdous Ashiq Awan said on Tuesday.

Addressing a press conference after a cabinet meeting in the federal capital, the de facto information minister that 1 million chloroquine tablets would be sent, respectively, to Saudi Arabia and United States; 500,000 to both Turkey and Italy; 5 million to the U.K.; 700,000 to Kazakhstan; and 300,000 to Qatar. She said the decision had been taken after Prime Minister Imran Khan informed the cabinet that leaders of some nations had called him with an eye toward importing the medicine from Pakistan to help treat COVID-19 infections.

“Pakistan always asks these countries for aid, so, for the sake of humanity and to improve the country’s credibility and image, this is our chance to them in this time of need,” she said, adding that the country had some 40 million tablets in stock and possessed raw materials to produce more if required.

According to Awan, plumbers, electricians, laborers and investors would also be protected under the amendments to the legislation. “The prime minister has reiterated that when the wheel of industry starts turning, the stove of the laborers’ home starts burning,” she said.

The federal cabinet meeting, per Awan, also approved reforms to the National Commission for Minorities Act, 1992. “The commission will now constitute two Muslims, two Hindus, three Christians, one Sikh, one Parsi and one member from the Kalash community,” she said, adding the chairman of the commission would also be chosen from among the minorities.

As is routine for the Special Assistant to the P.M., she could not resist taking some potshots at the opposition, claiming it was politicizing the coronavirus pandemic. She did not make any reference to the PTI lawmakers who grace TV screens daily slamming the Sindh government for their handling of the outbreak.

According to Awan, opposition members should help the government deal with COVID-19, and not serve as “spokespersons of Shahbaz Sharif,” who has demanded “live broadcast” of NAB questioning to him in ongoing corruption cases.