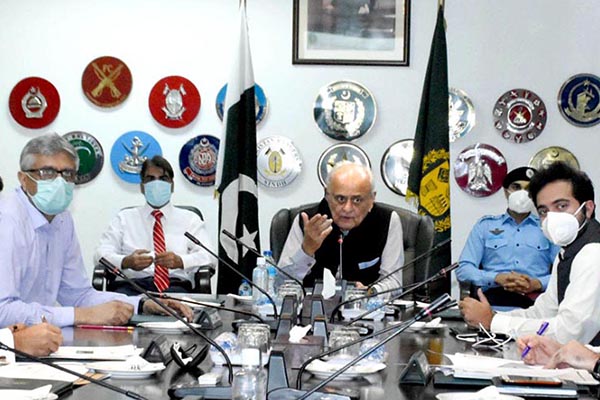 Interior Minister Ijaz Shah on Thursday warned anyone spreading disinformation about COVID-19 that the government would take strict action to ensure the public was not confused by incorrect and misleading material.

A meeting of the COVID-19 Disinformation Prevention Mechanism committee in Islamabad, chaired by Shah, directed all departments concerned to monitor the activities of any elements disseminating fake news and take legal action against them. The minister urged the Federal Investigation Agency (FIA)’s Cybercrime arm to take special notice of information being spread via social media, adding that appropriate action should be taken against anyone involved in such acts.

“The primary purpose of this committee is to ensure that correct and credible information goes to our people,” said Shah, vowing his ministry would utilize all available resources to catching the culprits behind the spread of disinformation.

During the meeting, the minister also tasked the director general of the Pakistan Electronic Media Regulatory Authority (PEMRA) to ensure that no fake news concerning the pandemic was broadcast on TV. “Everyone has his or her part to play in battling the pandemic,” he said, adding that the government’s hard work should not be defeated by “anti-state” elements spreading fake news.

Prime Minister Imran Khan’s focal person on digital media Dr. Arslan Khalid, a member of the committee, told daily Dawn that the interior minister would brief the National Command and Operation Center (NCOC) weekly on the steps taken to curb the spread of COVID-19 disinformation. He said the focal person would be responsible for flagging false content online and on TV with the assistance of the ISPR, and the interior ministry.

Any potentially damaging content would be reported to the health ministry, he said, which would determine if it sought to create a “sense of fear, panic or insecurity in the government or the public.” The accused would be initially approached by either the Pakistan Telecommunication Authority or PEMRA and directed to remove the offending content. If they do not remove the objectionable content, the FIA could be directed to take action, he added.

The nine-member committee consists of P.M.’s focal person on COVID-19 Dr. Faisal Sultan, as well as representatives of the Interior Ministry, Health Ministry, FIA, ISPR, PEMRA, PTA, and the NCOC.