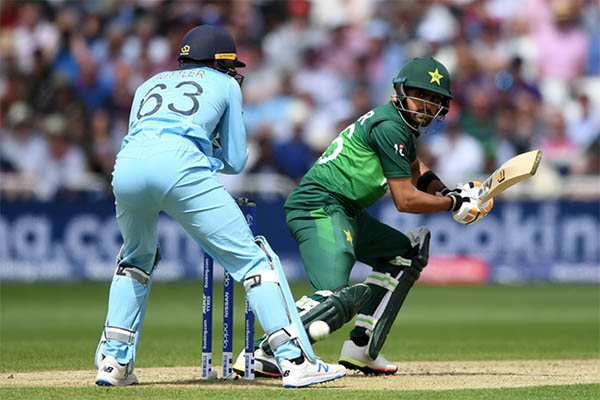 Pakistan lived up to their ‘unpredictable’ billing by beating world number one England in a World Cup match on Monday, just three days after losing to world number eight West Indies in their first game of the tournament.

An aggressive Pakistan team turned up at Trent Bridge to deservedly beat pre-tournament favorites England by 14 runs. It was in marked contrast to Pakistan’s seven-wicket humiliation by the West Indies at the same venue on Friday.

Yet England, perhaps, should have seen it coming for all they beat Pakistan, who had lost their 11 previous completed one-day internationals, 4-0 in a recent series. After all, the 2017 Champions Trophy in England and Wales saw Pakistan start the tournament with a 124-run defeat by India only to thrash their rivals by 180 runs in the final.

The lows and highs of Pakistan cricket were neatly summed by former England captain-turned-commentator Nasser Hussain. “Pakistan cricket at its best, one minute down, next minute up,” said Hussain when Azhar Ali dropped India captain and Virat Kohli off Mohammad Amir in the final and the very next ball Shadab Khan took a sharp catch to dismiss the star batsman.

Sent into bat by England on Monday, Pakistan posted their second highest World Cup total of 348 for eight, just one short of their score against Zimbabwe at Jamaica in the 2007 edition. It was the complete opposite to the way they batted on Friday when they were shot out for 105—their second-lowest World Cup total—by the West Indies pace trio of Oshane Thomas, Jason Holder and Andre Russell.

West Indies polished off the low target for the loss of just three wickets in a mere 13.4 overs, with Pakistan seemingly completely demoralized by the drubbing. But amid a chorus of criticism from former players and fans back home, Pakistan roared back right from the start against England, scoring 69 without loss in the initial 10-over power-play.

Pakistan captain Sarfaraz Ahmed accepted his team could go from the inept to the inspiring in just a few days. “That’s the interesting thing about Pakistan, so I always say be patient with us,” Sarfaraz told AFP after the match. “We told the players to show aggression against England and stage a strong comeback. I am happy that they did that,” added Sarfaraz who made a valuable 55 in an innings where Mohammad Hafeez’s 84 was the top score.

“The most important thing was to put a decent opening stand and once we did that we posted a good total and then the bowlers did very well,” the wicket-keeper explained.

Pakistan coach Mickey Arthur said last month that he and his backroom team were fed up with the clichéd description of the team’s form swings. “‘Unpredictable’—that’s a word that us as coaching staff hate,” Arthur said.

Pakistan’s performances in their first two matches of this World Cup indicate, however, they may have to live with the tag for a while yet. And Wasim Akram, a member of the Pakistan side that heeded the words of then captain and now prime minister Imran Khan to “fight like cornered tigers” as they came back from the brink of elimination to win the 1992 World Cup, suggested that perhaps they just ought to embrace it. “Even I don’t know why we are so unpredictable for so many years,” the left-arm fast-bowling great told AFP at Trent Bridge on Monday. “But it’s the beauty of Pakistan cricket and why people follow the team.”