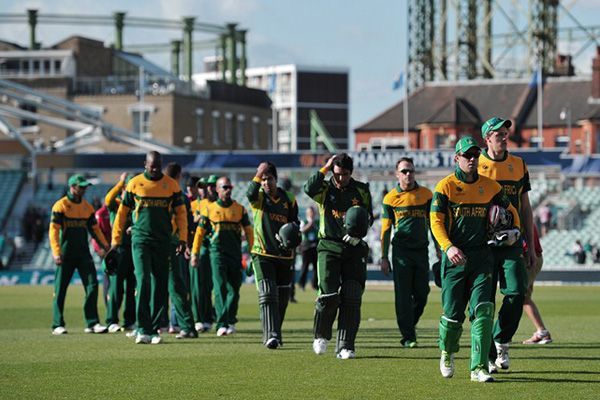 Pakistan fine-tuned their preparations for the Champions Trophy with an emphatic six-wicket victory over South Africa at The Oval on Monday.

Misbah-ul-Haq’s team put South Africa into bat and restricted the Proteas to 202-9 before chasing down the target with 4.3 overs remaining thanks to half-centuries from Imran Farhat and Mohammad Hafeez. To make matters worse for South Africa, there was concern over pace bowler Dale Steyn, who was given only five overs and appeared to struggle with an injury.

South Africa will feature in the tournament curtain-raiser against India in Cardiff on Thursday, while Pakistan get underway a day later against the West Indies at The Oval. Both sides utilized their squads during the 15-a-side clash, which allowed different batting and bowling XIs.

Pakistan was quickly among the wickets as Junaid Khan dismissed Hashim Amla for a duck with the third ball of the day. The Proteas’ top order continued to struggle against the new ball and when Faf du Plessis was sixth out they had just 61 on the board.

Had they sent in authentic tail-enders they would surely have struggled to reach three figures but instead they opted to give all their batsmen time at the crease and were rewarded with a 94-run stand between J. P. Duminy and Ryan McClaren. That helped the total past 200 before Asad Ali bowled McLaren for 55, with Duminy the last man out for 43.

Ali and Wahab Riaz each returned three for 30.

For its part, Pakistan came out aggressively, going after South Africa’s much-vaunted seam attack. Nasir Jamshed hit a six and a four prior to being run out, but Farhat carried on to make 56 before becoming the first of two Lonwabo Tsotsobe wickets Hafeez retired after scoring 54, leaving Misbah (24 not out) and Umar Amin (27 not out) to finish the job.