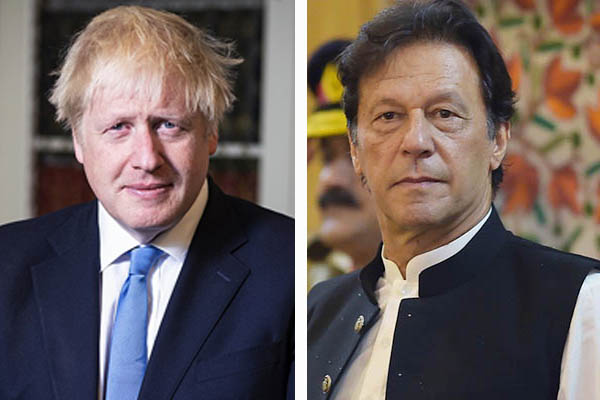 In telephone call, P.M. Khan and his British counterpart vowed to work together to defeat the coronavirus pandemic across the world

Prime Minister Imran Khan on Monday discussed the prevailing situation in Afghanistan with U.K. Prime Minister Boris Johnson, with both leaders agreeing that there was need to ensure a “long-term future of peace and stability” in the war-torn state.

“The U.K. would continue to use the diplomatic and development tools at our disposal to support the Government of Afghanistan,” Johnson was quoted as telling Khan, according to a statement issued by the U.K. Prime Minister’s Office. It said that the British premier had also expressed condolences over the “tragic loss of life” in the train derailment at Ghotki that has left at least 60 people dead and dozens more injured.

“Prime Minister [Johnson] began by expressing his condolences following the tragic loss of life in the train crash in Sindh,” read the press release. It said the two leaders had also discussed the need to take urgent action to curb carbon emissions and protect biodiversity ahead of the U.K.-hosted COP26 Summit later this year. In this regard, Johnson congratulated Khan on the “success of the U.N. World Environment Day event, which Pakistan hosted with the U.N.” last week, and which was addressed by the U.K. premier.

The press release noted that both prime ministers had also discussed the coronavirus pandemic and agreed to “work together to defeat the pandemic,” both in their countries, and around the world.

According to an accompanying press release issued by the Pakistani P.M.’s Office, Khan had urged Johnson to revisit the U.K.’s decision to place Pakistan on its “red list” of countries, which requires travelers to submit to a mandatory 14-day quarantine.

Khan also thanked the British premier for his “thoughtful video message for the World Environment Day event held in Islamabad.”

The press statement said that the Pakistani premier had conveyed to Johnson his desire to improve trade relations between their two countries, adding that this would allow both to forge an even stronger partnership in the future. He also briefed Johnson on the progress made by Pakistan thus far in strengthening its anti-money laundering laws in line with requirements of the Financial Action Task Force. He said the FATF should recognize “Pakistan’s achievements in complying” with the benchmarks set for it.

The U.K. prime minister also invited his counterpart to visit London, with sources claiming that Khan might travel there on an official visit next month. This would be the first visit by Khan to the U.K. since he became Prime Minister of Pakistan in 2018.