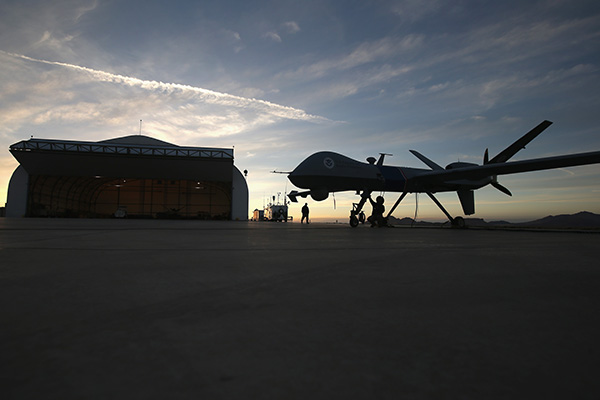 Two experts claim drones aren’t illegal, but ask Washington to release information on justification for use.

Pakistan on Friday renewed demands for an end to U.S. drone strikes on its territory as two U.N. experts called for greater transparency in the use of the weapons.

“In Pakistan, all drone strikes are a chilling reminder that reprisal strikes by terrorists are around the corner,” Pakistan’s U.N. ambassador Masood Khan told a U.N. General Assembly rights committee debate. Khan, following up a call made by Prime Minister Nawaz Sharif to U.S. President Barack Obama on Wednesday, said civilians had suffered “inhumane” deaths and the strikes had “radicalized” public opinion in Pakistan.

“We call for the immediate cessation of drone attacks inside the territorial borders of Pakistan,” Khan said. “We hope that the United States would respond to this urgent call from Pakistan anchored in international humanitarian law,” he added.

Obama refused to comment after his Washington meeting with Sharif on Wednesday on the U.S. drone strikes. A U.S. diplomat at the U.N. meeting highlighted an Obama speech in May in which he said the drone attacks on Al Qaeda and the Taliban were “necessary, legal and just.”

The United States said the U.S. government was giving “close attention” to a report by U.N. special rapporteur Ben Emmerson, a specialist on protecting rights in counterterrorism. At the U.N. meeting, Emmerson urged the United States and other countries using drones to release information on the justification for their use and “data on the level of civilian casualties inflicted through the use of drones.”

Emmerson said in his written report that Pakistan had told him that 400 of the 2,200 victims of drone attacks over the past decade were civilians.

Christof Heyns, U.N. special rapporteur on extrajudicial and arbitrary killings, said drones are not “inherently illegal weapons.” But he added that there had to be greater focus on drones because of the spread of their use.

“A world where multiple states use such weapons in secrecy is a less secure world,” Heyns told the meeting.