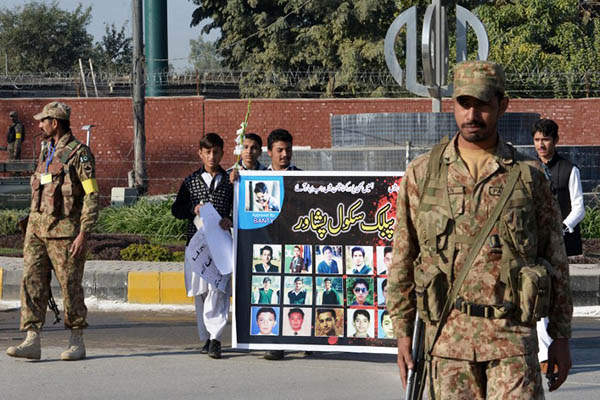 Teachers and students at the Army Public School say education is their best revenge.

Pakistan’s leaders called Wednesday for vengeance under portraits of children killed by Taliban bullets as the country marked the first anniversary of a school massacre that left 151 people dead in its worst-ever extremist attack.

Families of the victims along with military and political leaders attended an emotional ceremony at the Army-run school in Peshawar to mark the assault, which mostly claimed the lives of schoolchildren and has been termed a “mini-9/11” for the country. Relatives were accompanied by students bearing images of their loved ones as they spoke one by one of children with bright smiles who worried about their hair and handwriting but had dreams of being artists and engineers.

“My children, today I make this promise to you, that I will take revenge for every drop of your blood,” Prime Minister Nawaz Sharif said, addressing the victims directly. The ceremony, which a military official told AFP was attended by some 2,500 guests including celebrities and sports stars, was broadcast live on state television. Military chief Gen. Raheel Sharif and opposition leader Imran Khan were also in attendance.

Earlier, the parents of the 134 children killed in the hours-long siege visited their children’s graves. “We think a lot about the students who lost their lives,” Abu Bakar, a teacher who was shot three times as he threw himself in front of fleeing children during the siege, told AFP, saying the loss was “something that cannot be described.”

“This should not have happened to them, they were innocent students,” he said. “They came here for studies, they were not at war with anyone.”

On social media, Pakistanis were changing their profile pictures to an image depicting an Army Public School uniform with a bloody bullet hole resembling a poppy, and a caption reading: “Some stains don’t wash out.”

Two survivors of the massacre attended a somber ceremony on Tuesday in the British city of Birmingham at the behest of Nobel prizewinner Malala Yousafzai, who survived a 2012 Taliban attack.

The Taliban have said they carried out the Army Public School attack in retaliation for an Army offensive on extremists in the tribal areas. The mastermind Khalifa Umar Mansoor stated: “If our women and children died as martyrs your children will not escape.”

But the attack hardened public opinion against extremism and prompted a military-led crackdown that has improved security, with 2015 on course for the fewest deaths linked to extremist violence since 2007, the year the Pakistani Taliban were formed. However, critics say long-term steps are not being taken to eradicate extremism.

Pakistan deployed paramilitary forces and police in major cities for the anniversary. In Peshawar, the area surrounding the school was designated a red zone, and army helicopters hovered as hundreds of soldiers guarded main junctions.

Army Public Schools across the country were open for ceremonies marking the anniversary, even though a security official told AFP Tuesday they were “particularly under threat.”

One year on, a veneer of normality has returned to the Peshawar school, where children play while soldiers stand atop recently fortified walls. “All the people of Pakistan are with us and they are trying to support us and helping us to move towards the future and to just forget this incident,” said Muhammad Hamza, a 17-year-old student whose brother died in the attack. But the trauma lingers for many, with parents of the slain children saying they are still seeking answers about how the security apparatus could have failed them so completely.

In August, after a military trial behind closed doors, the Army announced that six militants linked to the Peshawar assault would be executed, while a seventh was given a life sentence. Four were hanged on Dec. 2. Some parents are demanding a full judicial inquiry, complaining that no government, security or military official has yet been held publicly accountable. At least a dozen families boycotted Wednesday’s ceremony in protest.

At the school, the prime minister declared December 16 a national day of education, promising he would not let extremists “burn out the flame of knowledge.”

Teachers and students told AFP that education was their best revenge. “The Taliban want us to quit our studies and become ignorant like them,” said 13-year-old Uzair Khan. “We don’t want to do that. God willing, we will continue our education, move forward and avenge them.”