In meeting with U.S. secretary of state, foreign minister underlines importance of timely humanitarian need to avert disaster in Afghanistan 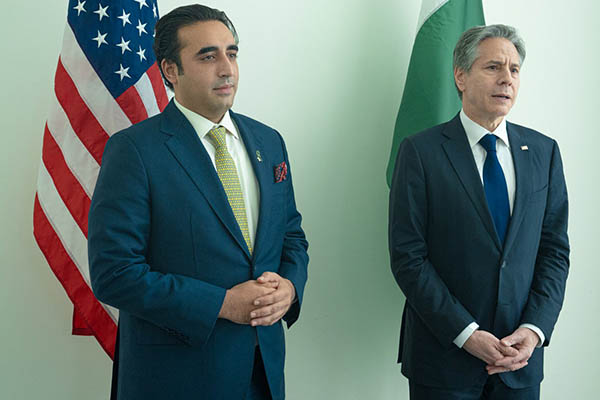 Pakistan wants to work with the U.S. to improve bilateral trade and create opportunities for Pakistani and American businessmen to work together, Foreign Minister Bilawal Bhutto-Zardari told U.S. Secretary of State Antony Blinken during a meeting on the sidelines of a global food summit in New York.

According to a press release issued by the Foreign Office, the foreign minister—who is on a three-day official visit to the U.S.—reaffirmed Islamabad’s determination to strengthen its broad-based, longstanding bilateral relations with Washington. Both sides “expressed satisfaction over the ongoing bilateral engagement in the areas of trade and investment, climate, energy, health and education and underlined the need to further reinforce cooperation through dialogue and decisions at a higher level,” read the statement, adding that Blinken had assured Bhutto-Zardari of the U.S.’s support for Pakistan’s burgeoning tech sector.

Both sides also agreed to increase their cooperation in the area of women empowerment, with the foreign minister stressing that was an “absolute priority” for the government. He also, per the statement, briefed Secretary Blinken about ongoing efforts to stabilize Pakistan’s economy, with the U.S. official saying Washington would support Pakistan’s efforts.

The Foreign Office said the foreign minister and the U.S. secretary had expressed resolve to work on the shared objective of a peaceful and stable Afghanistan. Bhutto-Zardari underscored the importance of inclusivity, protection of human rights, especially of women and girls, and timely humanitarian relief in Afghanistan, adding that effective ways were needed to address the threat of terrorism.

Noting that conflicts can be very traumatic for nations, he emphasized that Pakistan remained extremely concerned over rising Islamophobia and gross human rights violations in India-held Kashmir, as well as against minorities, warning that this threatened regional peace and stability. He stressed that the immediate challenge in Afghanistan was averting a dire humanitarian crisis and finding ways to facilitate banking channels.

During their conversation, the Pakistani minister also underlined the importance for all member states of the U.N. to adhere to principles of non-use or threat of use of force; respect for sovereignty of states; and peaceful settlement of disputes.

On Pakistan, Bhutto-Zardari said the country was facing challenges in food security, water security and energy security due to a range of issues that included climate change and global developments.

According to the Foreign Office, Blinken said the U.S. looked forward to strengthening its relations with the Group of 77, currently headed by Pakistan, through dialogue and communication. Welcoming the suggestion, the foreign minister said Pakistan would fully engage with the U.S. to promote dialogue between the G77 and the U.S.

Separately, during an interview with CNN’s Christiane Amanpour, the foreign minister said that Islamabad wanted the Taliban regime in Afghanistan to play its role in reducing terrorist activity on Pakistan’s side of their shared border. “We continue to not only monitor this situation, but work on our side to ensure that we can try to tackle the threat of terrorism and hope that the regime in Afghanistan lives up to their international commitment to not allow their soil to be used for terrorism,” he said, adding that any decision to recognize the new Afghan government would be taken in line with Islamabad’s discussions with the international community.

To a question on women’s rights in Afghanistan, he said that Islamabad would emphasize to the Taliban to adhere to their international commitments and ensure rights to all women of Afghanistan. Noting that developments in Kabul have had a direct impact on the lives of the people of Pakistan, he said the priority should be to resolve the humanitarian crisis and hold the Taliban regime to international commitments.

“It was not Pakistan, but the U.S. who had direct communication with the Taliban regime before their takeover of Kabul,” he said. “Pakistan and the international community believe it will not serve any of our interests if we abandon the people of Afghanistan once again,” he added.