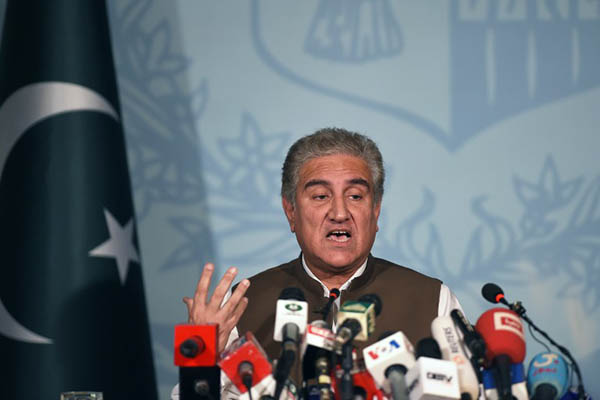 Foreign Minister Shah Mahmood Qureshi on Thursday urged the international community to remain engaged with Afghanistan, claiming shared goals of enduring peace and regional connectivity cannot be achieved if Afghans are abandoned at this ‘crucial’ stage.

“We believe that the biggest opportunity right now is convergence of the international community on the need of durable peace and stability in Afghanistan,” he told participants of the 6th Think Tank Forum at Islamabad’s Institute of Strategic Studies. “A sustained engagement will ensure steady transition and avoid repeat of 1990s. Afghan people must not be abandoned at this crucial stage,” he added.

Describing the Taliban’s announcements on a general amnesty, women’s rights, freedom of speech, employment and access to education, and their openness to an inclusive political setup as “positive and encouraging,” he said that Pakistan was continuing its support for an inclusive setup in Afghanistan.

“We have suffered the most after Afghanistan, both in terms of casualties and huge loss to the economy. No other country has a greater interest in peace and stability in Afghanistan than Pakistan. Continuation of conflict and instability in Afghanistan is certainly not in our interest,” he stressed, adding that Islamabad considered all segments of Afghan society—Tajiks, Uzbeks, Turkmen, Pashtun—important to the success of the state. “We reached out to all ethnic communities to reiterate our support to a united and peaceful Afghanistan,” he said.

The foreign minister also urged the Afghan leadership to come together and deliver on the demands of the Afghan people. “The Afghan leadership should take the responsibility of delivering on the demands of the Afghan people, reconcile their differences and achieve a negotiated political situation, a long-cherished objective,” he said. “Inclusive set-up is important for Taliban to gain people’s confidence and international acceptability. It will open new vistas of cooperation at regional and international level,” he said, adding, “It will help realize our common objectives of a region, free from scourge of terrorism, strongly linked with the international community through a web of connectivity projects.”

A peaceful Afghanistan is also essential for regional connectivity and economic gains, he said.

“We hope for a peaceful, stable, united and prosperous Afghanistan, contributing to regional peace, economic integration and connectivity. Together, it is possible. Our joint efforts can help us,” he said.

Stressing that Pakistan was a mere facilitator and not guarantor of an inclusive government in Afghanistan, he reiterated that Islamabad remained committed to “work together with the international community to advance the shared objectives of peace, progress and stability in Afghanistan.”

Earlier, the minister initiated his speech by noting that the international coalition had pursued a military solution in the region for two decades, adding that it was bound to fail because it did not acknowledge ground realities. However, he admitted that the withdrawal of international forces from Afghanistan, coupled with the absence of an Afghan-led and Afghan-owned political settlement, had created a crisis in the country.

The 6th Think Tank Forum featured discussions on “The Situation in Afghanistan: Options for Pakistan.” A virtual event, it was attended by representatives of think tanks and the heads of Area Study Centers across Pakistan. Qureshi served as the chief guest on the occasion.