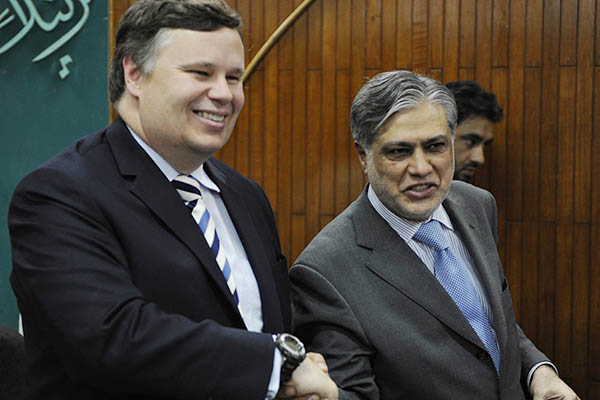 New government will need to enact reforms and reduce subsidies to ensure release of loan.

Pakistan on Thursday welcomed a $6.7 billion loan from the International Monetary Fund but economists warn it can only be a stopgap unless Islamabad enacts uncomfortable economic reforms.

The IMF executive board authorized a three-year loan, making an initial $540 million available to the Pakistani authorities. The remaining amount will be evenly paid out over the duration of the program, subject to the completion of quarterly reviews, the Washington-based global lender said.

“We welcome the timely decision by the IMF board in approving the loan,” said Rana Asad, a spokesman for the Pakistani finance ministry. He said Pakistan had got the loan on its “own conditions” and that the money would be used to pay off previous loans. “Basically it is for debt repayment,” he added.

The aid is an Extended Fund Facility, which is aimed at helping a country that faces serious balance-of-payments problems because of structural weakness that require time to address. The repayment period for an EFF loan is between four-and-a-half and 10 years.

In its announcement of the loan on Wednesday, the IMF said Pakistan’s adherence to the program would likely encourage financial support from other donors. “Despite the challenges it faces, Pakistan is a country with abundant potential, given its geographical location and its rich human and natural resources,” the IMF said. “The authorities’ program is expected to help the economy rebound, forestall a balance-of-payments crisis and rebuild reserves, reduce the fiscal deficit, and undertake comprehensive structural reforms to boost investment and growth.”

The country’s daunting array of problems range from an energy crisis to dwindling foreign exchange reserves and a sinking currency, set against the backdrop of a Taliban insurgency.

Gross domestic product growth came in at 3.7 percent in 2012 and is forecast to come in at 3.5 percent this year and 3.3 percent in 2014, according to the IMF’s latest projections.

The request for a loan came just weeks after May elections that marked the country’s first democratic transition of power, putting Prime Minister Nawaz Sharif in office for a third time. The approval for the new loan, meanwhile, came after months of negotiations.

Pakistan abandoned a previous $11.3 billion IMF loan program in 2011 after refusing to carry out strict financial reforms, and still owes about $4 billion to the Fund.

But Muzammil Aslam, managing director of Emerging Economics Research, which provides investment advice to fund managers, warned it would be difficult for the government to abolish tax subsidies and raise electricity tarries. “Nobody takes the Pakistani government seriously in terms of the economic reforms it is supposed to incorporate,” Aslam said. “The pre-conditions are very tough for the government to fulfill … Non-performance could cease the release of the loan and thus could raise bigger challenges for the government.”

Mohammad Sohail, chief executive officer of Topline Securities, a Karachi-based research and investment house, said the IMF would keep up the pressure on the government. “A quarterly review of the performance would compel the government to live with fiscal discipline otherwise it would face the music,” he said.

The political situation in Pakistan is also expected to pose a challenge for the IMF. “There isn’t any doubt that it’s going to be an extremely difficult program for the IMF to oversee,” said Jacob Kirkegaard of the Peterson Institute for International Economics. “If Pakistan was not a nuclear-armed country, the dominant countries at the IMF board would probably be less interested in trying everything possible to stabilize the situation there.”