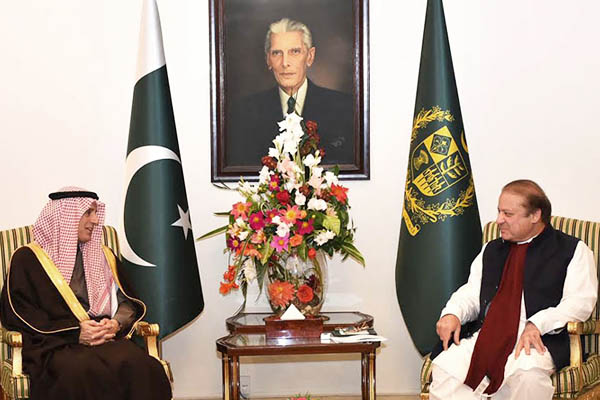 “Pakistan welcomes Saudi Arabia’s initiative and supports all such regional and international efforts to counter terrorism and extremism,” a foreign ministry statement quoted Sharif as saying.

Islamabad initially reacted cautiously to the announcement of the coalition, saying it was awaiting further details to decide the extent of its participation in different activities of the alliance. “The prime minister affirmed that the people of Pakistan will always stand shoulder-to-shoulder with the people of Saudi Arabia against any threat to territorial integrity and sovereignty of Saudi Arabia,” said the statement.

Saudi Arabia has repeatedly denounced international terrorism and has itself seen an upsurge of attacks claimed by the Islamic State group over the past year, against minority Shias and members of the security forces. The kingdom is founded on the teachings of fundamentalist cleric Mohammed bin Abdul Wahhab, whose thought has been accused of fuelling deadly Sunni extremism around the world, including that of I.S.

Sharif called for the “resolution of differences through peaceful means in the larger interest of the Muslim unity in this challenging time.”

The attack on the embassy was sparked by Saudi Arabia’s execution of prominent Shia cleric Nimr al-Nimr.

The Saudi foreign minister also held delegation level talks with the prime minister’s adviser Sartaj Aziz. “The two sides underscored the need to develop jointly a counter narrative against extremism and terrorism with the help of religious scholars.” It was agreed “both countries would make a concerted effort to promote multi-faceted cooperation and work together to defeat our common enemy—terrorism and extremism.”

The two sides also discussed ways and means to further expand areas of cooperation. “Pakistan has shown a slight leaning towards Saudi Arabia by staying in the 34-nation alliance whose objectives are not very clear,” said analyst Hasan Askari. “Pakistan has, however, kept some options open on how to deal with the situation of conflict with Iran and Saudi,” he said. “It seems that now the Iranians will contact Pakistan to get certain clarifications after the Saudi foreign minister’s visit.”