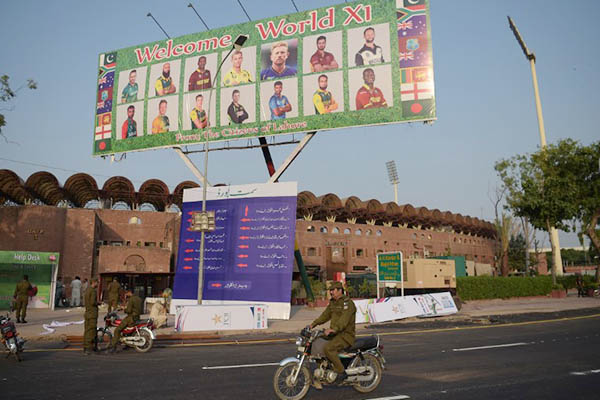 Pakistan take a huge step towards reviving international cricket at home after years of isolation when they host a three-match Twenty20 series amid tight security against a star-studded World XI, starting on Tuesday.

The series will be the most high-profile in the cricket-mad country since a 2009 militant attack on the Sri Lankan team bus in Lahore left eight dead and drove away international cricket and most other sports.

The Pakistan Cricket Board (PCB) has high hopes that the series will close that dark chapter for good—and allow a new generation of players to experience the thrill of playing before a home crowd for the first time. Juts five members of the current squad have done that before—skipper Sarfraz Ahmed, Shoaib Malik, Imad Wasim, Sohail Khan and Ahmed Shehzad.

“I can assure all Pakistan cricket fans that we have missed playing in front of them,” Ahmed said. “But I am confident that through this tour more cricket will come our way and we will [do] our best to win for home fans.”

“Everybody involved in the series will realize there are bigger issues at stake than winning at cricket,” said World XI coach and former Zimbabwe batsman Andy Flower. “However, I think when these excellent players get together as a team, their competitive juices will undoubtedly flow and they will come together and be doing everything in their power to win those games. I’m pretty certain about that,” added the former England coach.

Security has dramatically improved in Pakistan in recent years, but militant groups retain the ability to carry out spectacular attacks and officials are taking no chances. Some 8,000 police and paramilitary forces will guard teams as they travel back and forth from Lahore’s Gaddafi Stadium. Roads and shops will be closed around the 27,000-capacity venue, while spectators will have to pass through multiple security checkpoints.

While some vendors around the stadium have complained about the security, fans seemed unfazed. “I had to stand in a queue for seven hours before getting my ticket,” said local college student Mohammad Farooq proudly.

Since the 2009 attack Pakistan have been forced to play most of their “home” games in the United Arab Emirates—with the PCB complaining they have incurred losses of around $120 million. On the field, Pakistan will start favorites in their first outing since their shock victory at the 50-over Champions Trophy in England in June.

The World XI are led by South Africa’s Faf du Plessis and feature his countrymen Hashim Amla and David Miller, plus Bangladesh’s Tamim Iqbal and Australia’s George Bailey in strong batting line-up. They have also tempted out of retirement at the age of 41 the captain of England’s 2010 World T20-winning side, Paul Collingwood.

“I am positive that this series will serve to open the doors of international cricket in Pakistan,” said PCB Chairman Najam Sethi.

Support from the International Cricket Council (ICC) has been crucial. The ICC have accorded international status on the matches, which will be played on Tuesday, Wednesday and Friday, and are sending former West Indian great Richie Richardson as referee.

“The ICC wants to see regular international cricket being played safely in all its member countries and the World XI playing in Lahore is a step towards that for the PCB,” said ICC chief executive David Richardson. “We are optimistic that this will be the next step in a steady and safe return of international cricket to Pakistan.”

Whatever the result, if it passes without incident it will pave the way for a further, hugely symbolic step: the return of Sri Lanka next month. On Saturday, Pakistan announced the itinerary for a full Twenty20 series against Sri Lanka—mainly in neutral venues but, if the World XI passes without incident, the finale is planned for Gaddafi Stadium. If it comes to pass, it will be eight-and-a-half years since the deadly attack on Sri Lanka’s team bus outside the same Lahore venue, which left six police and two civilians dead, six players wounded.