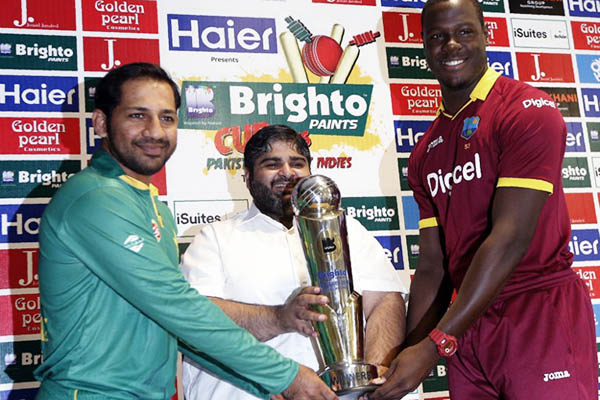 Pakistan produced another dominating performance to beat world champions West Indies by eight wickets in the third and final Twenty20 international, achieving their first ever clean sweep on Tuesday.

Left-arm spinner Imad Wasim chipped in with 3-21—nine wickets in the series—as West Indies crawled to 103-5 in their 20 overs after Pakistan once again caught them napping by putting them in on a slow and low Sheikh Zayed Stadium pitch in Abu Dhabi.

Pakistan then wiped off the target with Shoaib Malik, who made 43 not out, hitting the winning six off the first ball of the 15th over. Marlon Samuels scored 42 not out while Kieron Pollard made an unbeaten 16.

“Credit to the boys to keep their cool in this heat,” said Pakistan captain Sarfraz Ahmed. “It was a team effort. We knew we shouldn’t lose focus coming into this game. The bowlers deserve credit for restricting a good team on a good pitch. We didn’t over-attack, what’s happening let it happen and it’s a great win.”

Pakistan won the first two matches by nine wickets and 16 runs respectively—both in their “home turf” of Dubai.

And West Indian skipper Carlos Brathwaite once again blamed poor batting. “We didn’t bat well in the first six overs in all three games,” said Brathwaite, who replaced World Twenty20 winning captain Darren Sammy last month. “We never got a competitive total but Pakistan outplayed us in all three games. It’s a matter of skill and temperament. We will go back to the drawing board.”

The low target—West Indies’ fourth lowest total in the shortest format—was never out of Pakistan’s reach as Babar Zaman (27 not out) and Malik added 68 in quick time to seal the win.

Malik hit four boundaries and a six in his 34-ball knock while Azam knocked one boundary in his 24-ball innings.

Pakistan had raced to 36 in the sixth over before losing both their openers Sharjeel Khan (11) and Khalid Latif (21) to debutant paceman Kesrick Williams who finished with 2-15.

It was another story of sloppy batting by the West Indies who just last month piled up 245-6 against India in a Twenty20 at Lauderhill, Florida. From 12-0 in the first two overs, West Indies lost Johnson Charles for five and Chadwick Walton for a first ball duck—both to Wasim in the next over.

Wasim, who took a career best 5-14 in the first game, then had Dwayne Bravo (11) bowled in his fourth over to rock the West Indies to 31-4. Samuels and Nicholas Pooran (16) added 35 for the fifth wicket but Pakistan continued to press them hard with accurate bowling.

Samuels and Pollard added 37 for the unbroken sixth wicket but those runs came in 7.2 slog overs, with only six boundaries and a single six in the entire innings.