Pakistan Will Not Accept ‘Forceful’ Takeover of Afghanistan: Moeed Yusuf 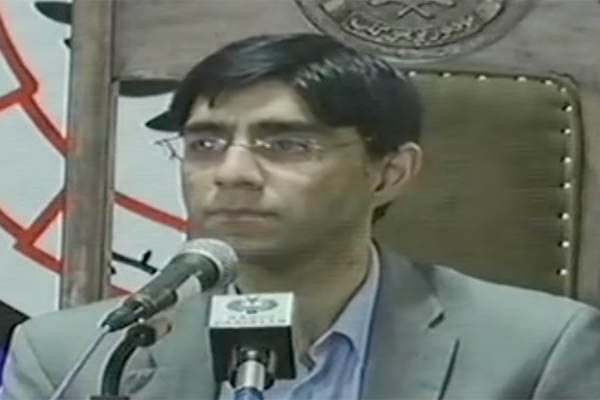 NSA denies that he complained about U.S. President Joe Biden not calling P.M. Imran Khan during his visit to Washington

National Security Adviser Moeed Yusuf late on Wednesday stressed that Pakistan will not accept a “forceful” takeover of Afghanistan, adding that Islamabad had consistently backed a negotiated political settlement for the war-torn state.

“We will not accept a forceful takeover,” he told media during a press conference at the Pakistan embassy in Washington, D.C., where he is currently on an official visit. Emphasizing that the only solution for lasting peace in Afghanistan was a “political one,” he said Islamabad had made it “absolutely clear” that it stood by the international community on desiring an end to the conflict in Afghanistan.

“But the world also needs to be clear that the U.S. invests in a political settlement,” he said.

The NSA regretted that the harsh rhetoric emerging from the Afghan government against Pakistan in recent months was making it “practically impossible” to maintain good ties between the neighboring states. “We are beginning to see a very conscious, deliberate effort by the Afghan government to scapegoat Pakistan,” he said, accusing Kabul of wanting to “shift the entire blame of its failures.”

Yusuf urged the elected government in Kabul and the Taliban to develop consensus and arrive upon a peace settlement, noting that the rapid gains made by the insurgents amidst the U.S. withdrawing all its troops was a matter of concern. He advised Kabul to stop looking for a military victory in the conflict, adding that a broader range of Afghans should be included in future talks.

The NSA also denied that he had complained to any U.S. officials about the U.S. president not calling P.M. Khan since assuming office earlier this year. Earlier this week, The Financial Times had published an interview with Yusuf in which he had suggested that it was “beyond understanding” why no direct contacts had been established between the two.

“The president of the United States hasn’t spoken to the prime minister of such an important country who the U.S. itself says is make-or-break in some cases, in some ways, in Afghanistan—we struggle to understand the signal, right?” he had said.

Yusuf also stressed that neither his U.S. counterpart, Jake Sullivan, nor did any other members of Biden’s administration make any specific requests of Pakistan, adding they had discussed “how quickly we can get all these actors in one room to have a sincere conversation.” He reiterated that Pakistan’s leverage over the Taliban had greatly diminished. “Whatever limited leverage we had, we used [for dialogue],” he said. “Now, with the [foreign] troop withdrawal, that leverage has logically gone down further,” he added.

He said that during his visit he had also discussed Pakistan’s economic situation with U.S. investors, adding that both countries should now look to the future rather than dwelling on the past.

Peace in Afghanistan is in the interest of both Islamabad and Washington, he said. Pakistan wants brotherly relations with all countries, he stressed, hailing the “friendship” between Beijing and Islamabad that had helped strengthen Pakistan’s economy.

To a question on Pakistan’s grey-listing by the Financial Action Task Force, he said the matter had not been discussed with U.S. officials, and hinted that the designation was politically motivated.

To another question, the NSA said Pakistan was not in a position to host any more Afghan refugees, adding that he did not agree that they should be allowed to enter any other country and should be kept in camps on their own soil. “We, under no circumstances, are prepared to see protracted instability that in the past has caused spillover into Pakistan,” he added.