Pakistan Will Not Rest Until Terrorism Eradicated, Sharif Tells U.N. 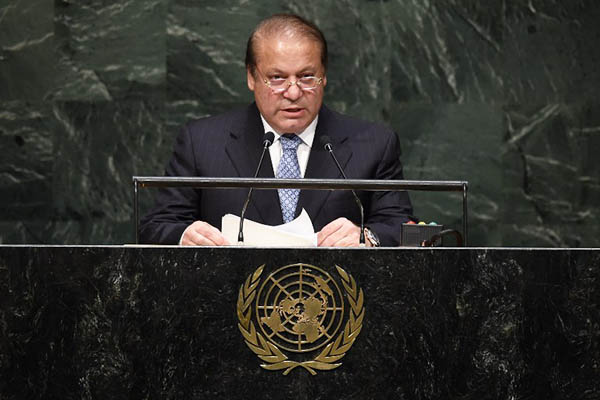 Pakistan condemns terrorism in all its forms, and will fight the “scourge” until it has been eradicated, said Prime Minister Nawaz Sharif on Friday.

Addressing the United Nations General Assembly session in New York, Sharif said Pakistan has been fighting terrorism for 13 years and over 50,000 people have been killed with “thousands” more injured. “It is the resolve of the nation to fight this scourge to the finish,” he said, adding that the government had devised a strategy to “prevent return and resurgence of militancy.” Sharif also condemned the Islamic State in Iraq and Syria, adding, “it has no sanction of any religion.”

The wide-ranging speech, in which Sharif also discussed the losses suffered by Pakistan due to this year’s devastating floods and urged the international community to commit to action on climate change, was the “highlight of the day,” according to Foreign Secretary Aizaz Ahmed Chaudhry. “The prime minister projected Pakistan’s perspective to the world,” he told a press briefing after the speech.

Iftikhar Ali, the Associated Press of Pakistan’s U.N. correspondent since 1973 told Newsweek Sharif had performed “very well” in light of the political unrest back home. “He was categorical on various issues: nuclear disarmament, Kashmir, Afghanistan, India,” he said. “[However] He should have interacted more with foreign media to help clear some of the misunderstandings about Pakistan,” he added.

In the speech, Sharif praised the U.N. for aiming to eradicate poverty by 2030 but warned that this required careful planning. “We need a new approach to eliminate conflict and violence and reduce inequality within and among nations,” he said, adding that the Government of Pakistan had launched Vision 2025 to achieve a welfare state as envisage by Quaid-e-Azam Mohammad Ali Jinnah. “In the coming decade, we will develop human and social capital through investment in education, health and gender parity; stimulate sustained economic growth; prioritize energy, water and food security; modernize public sector, and encourage private sector-led entrepreneurship,” he said, adding that regional peace, political stability and energy were key to these aims.

The prime minister said Islamabad was “disappointed” at India’s cancellation of foreign secretary-level talks, saying it was a “missed opportunity.” He also urged the U.N. to pursue the issue of a plebiscite in Kashmir. “The core issue of Jammu and Kashmir has to be resolved. This is the responsibility of the international community,” he said, adding, “Our support and advocacy of the right to self-determination of the people of Jammu and Kashmir is our historic commitment and a duty, as a party to the Kashmir dispute.”

According to foreign secretary Chaudhry, the P.M.’s stance on Kashmir was necessary to “put our point across clearly.” He said: “Quaid-e-Azam said Kashmir was the jugular vein of Pakistan [and] we’ve always considered this an important issue.” Chaudhry also said that Pakistan wanted friendly relations with India but would not compromise on the issue of Kashmir.

Sharif’s speech also reiterated Pakistan’s desire to see a “stronger, more stable, and unified Afghanistan.” He said that both countries shared common challenges and should strive for “strategic cooperation” over rivalry. However, he added that Pakistan continues to host millions of Afghan refugees and the international community needed to support their repatriation and reintegration in Afghanistan.

Referring to Pakistan’s nuclear weapons, Sharif said the country was not engaged in any kind of “arms race” but would maintain minimum deterrence. “To promote stability, we are prepared to explore new confidence building measures,” he added. He said Pakistan fully supported nuclear disarmament but it had to be universal and verifiable.

The prime minister also welcomed the ceasefire in Gaza and urged the U.N. to facilitate a lasting ceasefire. He said Pakistan was committed to peacekeeping and was contributing over 1,100 troops for U.N. peacekeepers. He also praised the U.N.’s reforms plans, and stated Pakistan’s support for a “more representative, equitable, accountable, and transparent” Security Council.