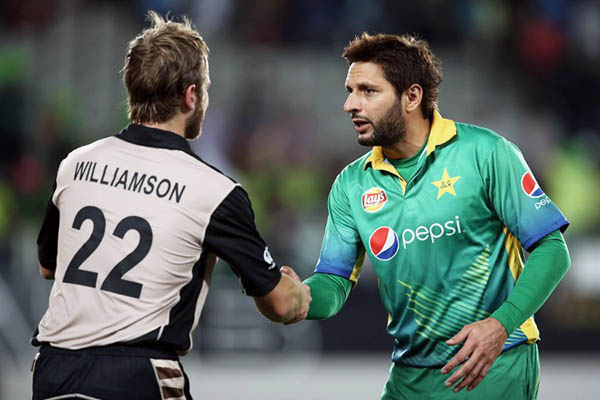 National team won by 16 runs after limiting rivals to 155.

Pakistan outsmarted New Zealand by stifling their feared batting barrage to win the opening Twenty20 by 16 runs at Eden Park in Auckland on Friday.

Disgraced player Mohammad Amir may have been the center of attention in his comeback game, but it was Shahid Afridi’s astute captaincy and the miserly bowling by Imad Wasim that made the difference.

With no warm up game to acclimate, Pakistan were rather run shy at the top and tail of their innings but still managed 171-8. But apart from a speedy 46 off 27 by Colin Munro, and a stubborn 70 by Kane Williamson, New Zealand had no answer to the Pakistan attack and were all out on the last ball of their innings for 155.

When Munro was at the crease, New Zealand raced to 89-1 in 10 overs, a slightly better run rate than Pakistan managed at the same stage. But his dismissal started a dramatic collapse in which five wickets fell for 19 runs.

Afridi bowled a two-wicket maiden to finish with two for 26 to go with three catches while Imad Wasim took one for 18 off his four overs with nine of those runs coming in one over.

Wahab Riaz took two wickets in the final over to finish with three for 34, and Amir marked his return to international cricket after a five-year ban for spot fixing with one for 31.

New Zealand pin a lot of their scoring hopes on opener Martin Guptill, who bludgeoned the Sri Lanka attack in recent weeks, but only faced three balls before he was run out for two. New Zealand had quickly lost patience with the tight Pakistan field settings and accurate bowling and Williamson’s eagerness for a quick single in the second over cost Guptill his wicket.

Williamson batted through until the final over but without being able to dictate the pace of the game and his 70 coming off 60 deliveries.

Mohammad Hafeez set up the Pakistan innings with 61 off 47 but the real damage for Pakistan came in a brief cameo by man-of-the-match Afridi in which he belted 23 off eight deliveries. He particularly distorted Matt Henry’s figures, clouting 20 runs off four balls.

Umar Akmal’s 24 off 14 and Wasim’s 18 off nine also helped boost Pakistan to a target the ultimately proved too much for New Zealand.

Adam Milne was the most successful of the New Zealand bowlers with four for 37 while Mitchell Santner took two for 14.

The second match in the three-match series is in Hamilton on Sunday.