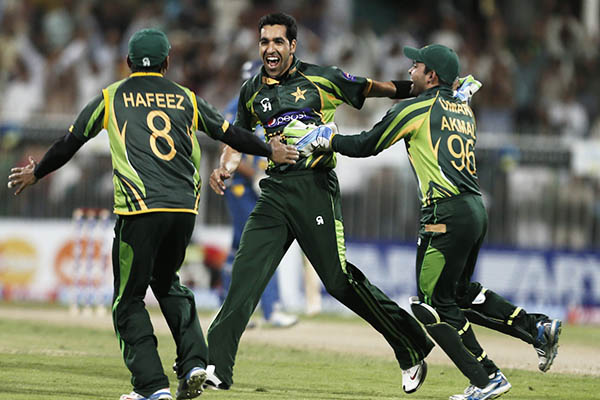 Mohammad Hafeez helped guide Pakistan to a convincing 113-run win over Sri Lanka in the third day-night international on Sunday, giving the national team a 2-1 lead in the five-match series.

The 33-year-old right-hander smashed a career best 140-not out to steer Pakistan to 326/5 before taking the pitch to dismiss Sri Lanka for 213 in 44.4 overs at Sharjah stadium. Hafeez accounted for Dinesh Chandimal (36) and Seekkugge Prasanna (22), helping thwart any hopes for Sri Lanka’s victory.

Paceman Umar Gul, playing his first match since March this year after a knee operation, gave Pakistan a sound start by dismissing Kusal Perera (seven) and Dimuth Karunaratne (0) in his first spell of five overs and then had the last man Lasith Malinga to finish with 3-19.

Opener Tillakaratne Dilshan hit 10 boundaries in an aggressive 62-ball knock of 59 but fell to Shahid Afridi as the Sri Lankan innings fell apart. Kumar Sangakkara also hit a six in his 14 before he fell to paceman Junaid Khan who took 2-40. Skipper Angelo Mathews chipped in with 44 but his dismissal signaled the end.

Winning captain Misbah-ul-Haq said he was happy with the total. “I am really happy at this win,” said Misbah. “We were happy to bat first and Hafeez and Ahmed Shehzad (81) gave us an ideal platform for a winning total.”

Mathews rued his team’s batting failure. “We chased well in the first two matches. There was an ideal opportunity today as well but unfortunately we didn’t bat well right from the start,” said Mathews.

Pakistan were once again helped by Hafeez and Shehzad after they were put into bat. Hafeez, who hit 122 in the opening game in Sharjah last week, laid the foundations of the innings with opener Shehzad (81) during their second wicket stand of 160 after Pakistan lost Sharjeel Khan for two in the third over. Hafeez, dropped by Lasith Malinga off leg-spinner Prasanna when 26, took full advantage of the chance and hit 11 boundaries and three sixes in an enthralling knock. He took a couple off Malinga in the covers to reach his hundred, which came off 119 deliveries, and added a quick-fire 75 for the fourth wicket with skipper Misbah who made a rapid 26-ball 40.

Shehzad set the tempo, following his 124 in Pakistan’s two-wicket defeat in the second match in Dubai, with an 89-ball knock which had six fours and two sixes. Shehzad was run out in the 31st over but Hafeez kept one end intact as Pakistan scored 105 in the last ten overs with Misbah also in top form.

Sohaib Maqsood chipped in with a run-a-ball 21, laced with two sixes and a four. Amidst the run-spree, Thisara Perera took 2-58. The remaining two matches will be played in Abu Dhabi on Wednesday and Friday.