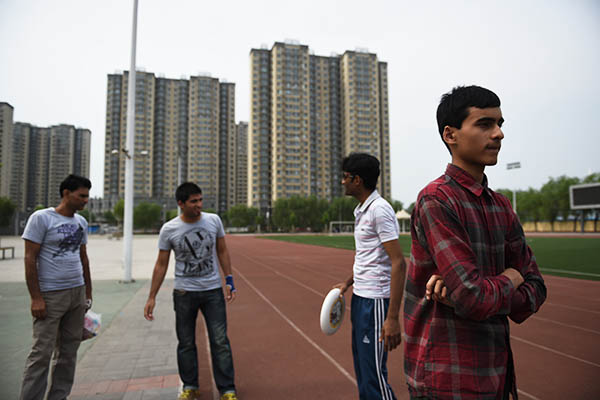 Members of persecuted minority claim there is more safety in China but add that they don’t expect any aid from Beijing.

Fleeing discrimination and violence, Ahmadis have abandoned their homes in Pakistan to find an unlikely refuge in China.

“Every day I heard the sound of guns,” said a 37-year-old surnamed Saeed of his former home Lahore. “We prayed every day, because we felt something could happen to us at any time.”

He is one of hundreds of people who have sought asylum in China in recent years, often from conflict and violence-stricken countries including Iraq and Somalia. The government tolerates their presence but provides almost no support, while human rights groups have for years condemned Beijing for deporting tens of thousands of asylum seekers who enter it to escape oppression in North Korea and Myanmar.

Around 35 of the almost 500 U.N.-registered asylum seekers and refugees currently in China are Ahmadi Muslims—a sect which believes their 19th century founder Ghulam Ahmad to be a prophet, and that Jesus Christ died aged 120 in Srinagar, in Indian-administered Kashmir.

They are among the most persecuted minorities in Pakistan—a constitutional Islamic republic which bans them from calling themselves Muslims or going on the Hajj pilgrimage to Mecca.

In 2010 militants stormed two Ahmadi mosques, killing 82 worshippers in gun and grenade attacks, before targeting a hospital where victims were being treated. Ahmadi mosques and graveyards are regularly desecrated. Even high-achieving Ahmadis have been shunned, including physics professor Abdus Salam, Pakistan’s only Nobel laureate.

China is regularly condemned by the U.S. State Department for its restrictions on religious freedom, which analysts say are key elements of the tensions it faces in Buddhist-majority Tibet and mainly Muslim Xinjiang. But Saeed, who arrived four years ago, said: “From a security point of view, China is good.

“There is almost no terrorism compared to Pakistan, where there is killing and persecution of minorities every day,” he said in a rented apartment in Sanhe, a city outside Beijing where clumps of high-rise apartment blocks overshadow restaurants offering donkey meat burgers. Two of his cousins were killed in the 2010 attack, he added.

The Ahmadi refugees in Sanhe said they paid middlemen up to $3,000 each for Chinese visas—more than twice the average yearly income in Pakistan. Once in China, Saeed said, “You have to do everything for yourself.” He lives off overseas family donations and added: “I don’t expect anything from the Chinese.”

New arrivals receive no benefits unless the U.N. grants them refugee status after a grueling 18-month series of tests and even then China refuses to integrate them, denying them the right to work while they wait for acceptance from a third country, often for years. “In this kind of a situation, you can’t enjoy life much,” said Saeed.

But teenager Laiba Ahmad, who arrived around two years ago with her mother and several siblings, had no doubts, even though she does not have enough Chinese to attend school. “I am happy here compared with Pakistan,” she said. “Pakistan was dangerous. We could not go outside without our brothers and fathers, if you are a woman especially.”

On a recent afternoon around 10 refugees gathered in Saeed’s flat for an English lesson. Practicing the present tense, they called out descriptions of their jobless lives. “We play football daily,” offered Ahsan Ahmad, 22, who fled Pakistan after mullahs attacked two of his uncles. “We offer prayer daily,” said another student.

China signed up to the U.N.’s refugee protocol in 1982, but does not have any mechanism to assess their claims, leaving it to the U.N. High Commissioner for Refugees (UNHCR). Its Beijing office has only eight permanent staff to cover the world’s most populous country.

China adopted a revised entry-exit law last year which entitles refugees to documentation, but refugees and UNHCR said it has yet to be enforced. Rights groups have previously accused China of taking a harsh stance toward North Korean asylum seekers in order to maintain good relations with Pyongyang.

Pakistan has long been an ally of China. “Refugee issues in China are tangled with some of the most politically and strategically sensitive issues in the Asia-Pacific region,” said Lili Song, visiting researcher at Northwestern University’s Center for Forced Migration Studies. “There may also be concerns about attracting more asylum seekers,” she added.

Saeed left earlier this week with his wife and two-year-old daughter for a leafy suburb in the U.S., ahead of World Refugee Day on Friday. But others wait on.

Yasir Chaudry, 24, a former air-conditioning engineer who left his wife in Pakistan, shares a crumbling apartment with two other refugees who rise in the late afternoon and fill their days surfing the Internet, watching DVDs, or throwing around a frisbee held together with black masking tape.

“All I have time to do is think, so I think about bad things, like how my family is not together,” he said. “I didn’t want to leave my country. These problems all come into my mind.”

Ahmadis are persecuted regularly in Pakistan, where minorities are considered Compulsory for Death !! The ones who embrace Ignorance are allowed by law to kill under state laws.