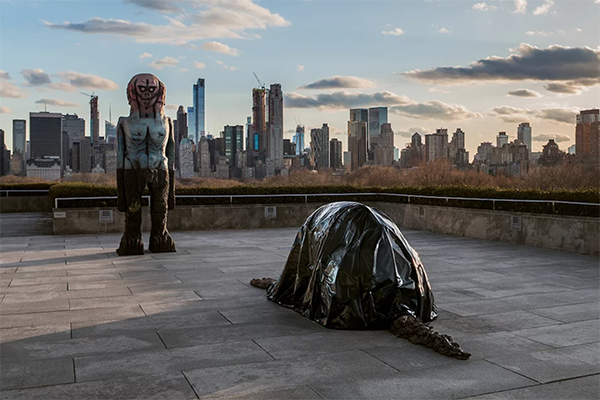 Courtesy of the Metropolitan Museum

Huma Bhabha’s rooftop installation in New York, Benaam, is meant to encourage visitors to form their own interpretations

A Pakistani-American sculptor brings dark times, science fiction and a desire to provoke to New York’s famed Metropolitan Museum of Art for this year’s rooftop installation overlooking the Manhattan skyline.

Huma Bhabha’s We Come in Peace depicts a towering 12-foot, five-headed figure weighing 1.5 tons and an 18-foot long prostrate figure covered in a trash bag and called Benaam, or “without name” in Urdu.

The installation, which opened on Tuesday, is the sixth annual commission at the illustrious U.S. museum’s roof garden, a popular summer spot that draws nearly half a million visitors every year.

Bold, dramatic and thought provoking, the weatherproof figures cast in bronze have political undertones, reflect social concerns and reference ancient African and Indian sculpture, according to the Met. “It’s what is brewing in your head,” Bhabha told AFP, insisting she wants visitors to make their own interpretations.

“I don’t want to necessarily say it’s this or that because that closes the conversation, but there are lots of different scenarios that one can come up with.”

Nor does she join the chorus in Democrat-heavy New York that focuses blame on U.S. President Donald Trump for what many in the city see as the country’s ills. “It goes beyond Trump,” she said. “Yes, he has made everything very vulgar and very in your face. But I think there are problems that have been existing much before he took over,” she said. “I think we’re in very dark times.”

The work was at least partly inspired by 1951 science-fiction film The Day the Earth Stood Still in which an alien arrives on our planet telling humans they must live peacefully or face destruction. “Huma’s work felt right for this particular moment,” explained Shanay Jhaveri, assistant curator of South Asian art. “There are numerous levels of meaning embedded in them and I think we just wanted people to step back and to be provoked a little bit,” he said in an interview.

“There is politics in it. What is happening under that garbage bag? What is the form?” Jhaveri said.

He urged viewers to “think through various kinds of concerns that they are seeing around them in these times of anxiety and paranoia and danger and collapse.”

Bhabha specializes in figurative sculpture and has addressed themes such as colonialism, war and displacement in her work. Her work has been exhibited at New York’s MoMA PS1, as well as the Venice Biennale and the Gwangju Biennale in South Korea, among others.

The installation is scheduled to remain open until Oct. 28, weather permitting.