by AFP and Newsweek Pakistan December 5, 2014 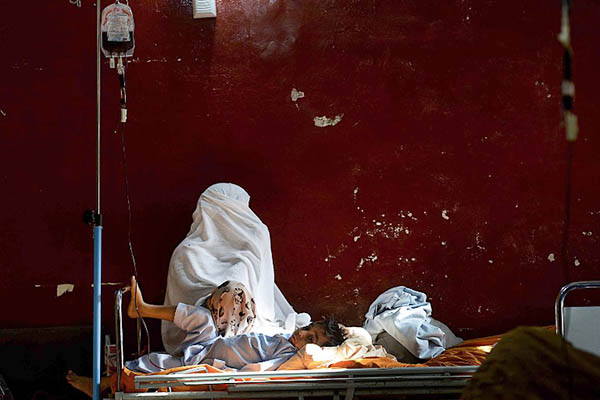 Ten children between five and 16 years old have been diagnosed with the deadly disease, allegedly due to tainted blood transfusions.

Ten children have been infected with HIV allegedly after receiving tainted blood transfusions, officials said Thursday, in a “shocking” case highlighting the abysmal state of blood screening in Pakistan.

The children, aged five to 16, all suffer from the hereditary blood disorder Thalassemia, which requires patients to undergo regular transfusions.

Saira Afzal Tarar, minister of National Health Services Regulation and Coordination, slammed the case as “shocking” and promised an investigation. “I have sought reports about the incident and I am also writing to the provincial governments about it,” she said.

While Pakistan has federal and provincial acts of Parliament requiring blood screening, implementation is weak. “The people responsible should be punished and punished very severely,” said Javed Akram, vice-chancellor of the Pakistan Institute of Medical Sciences (PIMS). “Somebody struggled with a lifelong disease and you gave them another lifelong disease,” he said.

Akram said the number of children affected was likely to increase as more Thalassemia patients are tested for HIV, adding that the infected children would receive free treatment for both HIV and Thalassemia.

Dr. Yasmin Rashid, secretary general of the Thalassemia Federation of Pakistan, said the 10 children were from Islamabad, Rawalpindi and Lahore, but explained that it was hard to pinpoint at this stage which blood banks were responsible for the tainted transfusions. “All these children go through multiple transfusion centers. If they don’t go through one center they go from another center.”

Rashid said that while some transfusion centers screen for Hepatitis B and C, they do not normally test for HIV.

Hasan Abbas Zaheer, the project director of the government-run safe blood transfusion program, however, said it was premature to suggest the children had been positively diagnosed with HIV. “Everyone is assuming that this infection has been confirmed and that it has been transmitted because of contaminated blood. Both these assumptions are flawed and the conclusion is not correct,” he told Newsweek.

Zaheer said there was a protocol that must be followed before a person can be definitively considered to be HIV positive. “I am confident that protocol hasn’t been followed,” he said, adding that confirmation testing was required.

“All the tests haven’t been done and they’ve just given a sweeping statement to the press, spreading confusion throughout the country,” he said, adding that Dr. Rashid should have taken more care before causing panic.

In response to the incident, the Hussaini Blood Bank in Karachi has offered the Pakistan Federation of Thalassemia highly subsidized rates for screening blood samples for HIV, its chief executive officer Asad Ali said. He said the Hussaini Bank alone provides blood transfusions to around 25,000 Thalassemia patients annually. The PIMS vice-chancellor said that the nationwide figure is much higher, including thousands of children.

Thalassemia prevents the production of hemoglobin and affects an estimated 50,000 people in Pakistan. Pakistan is considered a low prevalence country for HIV, with UNAIDS estimating that less than 0.05 percent of the general population carries the disease. But the disease is expanding among intravenous drug users, sex workers and migrant laborers returning from the Gulf.