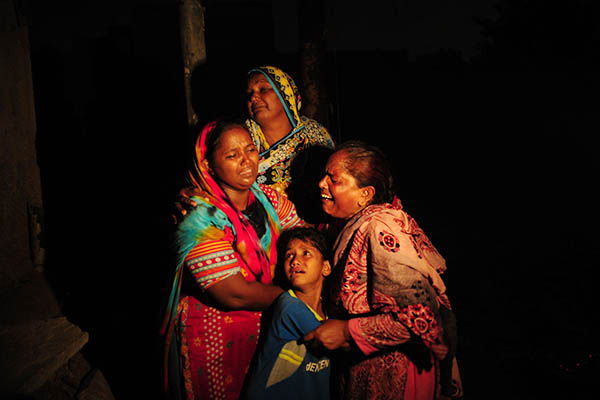 A devastating double suicide attack on a church in northwest Pakistan has triggered fears among the country’s Christian community that they will be targeted in a fresh wave of Islamist violence.

The blasts that tore through the congregation at All Saints Church in Peshawar after the service on Sept. 22, killing 82 people, are believed to be the deadliest attack ever on Pakistan’s small Christian community.

The country has been wracked by years of Islamist violence and a rising tide of sectarian attacks among Muslims, but before now the biggest concern among Christians has usually been mob violence triggered by blasphemy allegations.

Shaloom Nazir, 14, was getting ready for Bible study at the 100-year-old church when the bombers struck just before noon. In an instant he lost his mother, father, sister, brother and uncle.

“I was going to sit down in the church for a Bible class when I heard the explosion, so I ran out,” said Nazir, his voice choked with grief, his eyes fixed lifelessly on some distant point. “There were about 300 people lying on the ground. I recognized my mother, I took her in my arms.”

It was to no avail—she later died of her injuries.

The walls of the courtyard were pockmarked with the ragged metal ball bearings that had been packed into the suicide bombers’ explosive vests to cause maximum carnage.

Many Pakistani Christians are the descendants of low-caste ancestors who converted during the days of British rule, and most are poor, relegated to dirty, undesirable jobs. They make up just two percent of Pakistan’s 180 million population and have suffered attacks and riots in recent years over allegations of profaning the Quran or Islam’s Prophet.

Sectarian violence between majority Sunni Muslims and minority Shia, who make up about 20 percent of the population, has risen alarmingly in recent years, but Christians have largely escaped the bloodshed. Sunday’s carnage has raised fears that this might change.

“We have been treated like sinners. We have no lands, we have no factories, we have no business,” said Saleem Haroon, who came to see two wounded cousins at Peshawar’s Lady Reading hospital. “It is a new war. Before, the Shias were the target, but now we are the target. They want to create a new battle, a new battleground.”

In a corner of a room at the hospital, the blood of some of the victims mingled on the tiled floor with rubbish and dirty water. “We are just sweepers and still we have been treated like this. Look over there in the washroom,” he said, gesturing angrily at the mess. “If all the Christians die, who will clean it? All the sweepers died yesterday.”

Danish Yunas, 35, a driver who was lucky to escape from the blast with just a leg wound, said Christians and Muslims had got on well in the past, but he feared those days were at an end.

“We had very good relations with the Muslims—there was no tension before that blast, but we fear that this is the beginning of a wave of violence against the Christians,” he said.

The bishop of Peshawar, Humphrey Peters, said he had asked the authorities to review security for Christians but to no avail. “I am afraid that this is the beginning, it can spread to the rest of Pakistan. We are the soft target. The Christians are the soft target,” he said. “We are the poorest of the poor in this particular region and then we are also marginalized.”

A militant faction linked to the Pakistani Taliban claimed Sunday’s attack, but the main spokesman for the umbrella Tehreek-e-Taliban Pakistan (TTP) group denied responsibility. The government has proposed talks with the Taliban and TTP spokesman Shahidullah Shahid said the church bombing was an attempt to sour the atmosphere.

Speaking in London on Sunday Prime Minister Nawaz Sharif said the government was “unable to proceed further” with talks following the church attack.

Thousands of angry Christians protested around Pakistan on Monday to demand better protection from the authorities.

In the poor, grimy streets around All Saints Church, they raged against the national government in Islamabad and in particular against the Khyber-Pakhtunkhwa provincial government led by former cricketer Imran Khan’s Pakistan Tehreek-e-Insaf (PTI) party.

“We have been betrayed … Yesterday, none of the government came here,” said teacher Asif Nawab outside the church.

PTI came to power in Khyber-Pakhtunkhwa in elections in May on the promise of a “tsunami” of change. But after losing most of her family in the attack, Shaloom’s aunt Afia Zaheen was left to wonder if the change that had come was a new fear of attacks. “In the elections Imran Khan said this is a tsunami, it will bring change, but where is the tsunami? Is this the change?” she said.

i protest it is against the humanity and the worst behavior minorities.