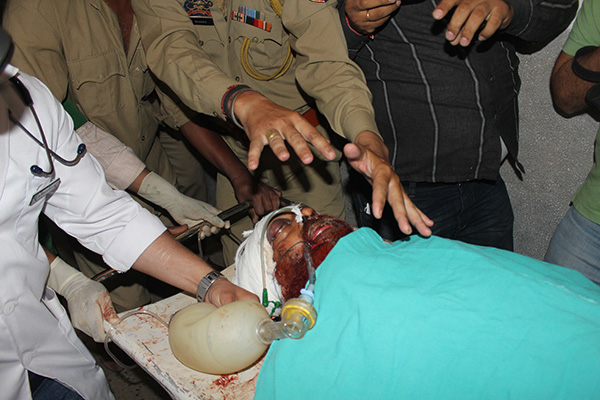 Sanaullah Ranjay at a hospital in Jammu. AFP

A Pakistani imprisoned in India was critical on Friday after being attacked by an inmate, an official said, in apparent tit-for-tat jail violence that has strained relations between the neighboring countries.

The attack came after Sarabjit Singh, an Indian convicted in Pakistan for spying and deadly bombings, died on Thursday following a savage beating in Lahore’s Kot Lakhpat Jail, sparking a furious response from Indian politicians.

Singh was cremated with state honors on Friday in his native village in northwestern India where hundreds of angry demonstrators shouted “Down with Pakistan!” as they gathered to pay their tributes.

The injured Pakistani prisoner—a convicted murderer named Sanaullah Ranjay—was assaulted early Friday in the northern city of Jammu, a day after India’s home ministry ordered increased security for jailed Pakistanis. Ranjay was in critical condition and was to be airlifted to a hospital in the city of Chandigarh for treatment, said K. Rajendra, the state’s director general of prisons.

“It was a scuffle between the Pakistani prisoner and Vinod Kumar, who is an ex-Indian Army soldier. Both of them were serving life imprisonment,” Rajendra said.

Ranjay was photographed with a swollen black eye and a bloodied beard as he was rushed into hospital in Jammu where he underwent surgery.

“This obvious retaliation to the death of Indian prisoner Sarabjit Singh is condemnable,” said a statement from the Pakistan foreign ministry, which asked for a police probe. “We would also remind the government of India of its responsibility in ensuring the safety and security of all Pakistani prisoners lodged in Indian jails,” it added.

Rajesh Kumar, the police chief for Jammu province, said that police had registered a case and had begun investigating.

The Indian foreign ministry promised consular access to Pakistan and proposed a meeting of authorities from both countries to suggest measures to avoid “such tragic incidents in future.”

The violence is likely to cause further friction between India and Pakistan, whose ties were hit by a border flare-up earlier this year that undermined efforts to build trust.

Indian Prime Minister Manmohan Singh condemned the “barbaric and murderous attack” on Sarabjit Singh on Thursday and New Delhi complained that its diplomats were denied access to the prisoner as he fought for his life. The opposition Bharatiya Janata Party and Sarabjit Singh’s family attacked the government for being too soft on Pakistan, while Parliament’s lower house passed a resolution condemning the death.

On Friday, hundreds of mourners gathered in Singh’s hometown of Bhikhiwind to pay their last respects at a public ground where the body was displayed in a wooden coffin wrapped in the Indian flag. Rahul Gandhi, vice president of the ruling Congress party, and a host of other political leaders attended the last rites held on the outskirts of the village close to the India-Pakistan border amid tight security.

Sarabjit Singh was convicted 16 years ago for espionage and for his alleged involvement in a string of bomb attacks in Pakistan’s Punjab province that killed 14 people in 1990. Former president Pervez Musharraf and the courts rejected his mercy petitions. His family insists he was a farmer who became a victim of mistaken identity after inadvertently straying across the border while drunk. India’s government also denies he was a spy.