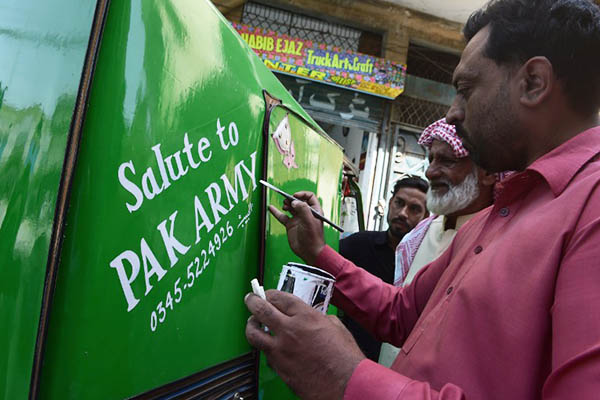 Messages inscribed on trucks, rickshaws are helping combat censorship of free speech across the country.

Pakistan has long been known for the garish decorations with which drivers lovingly adorn the rickshaws and ageing Bedford trucks that ply the country’s dusty roads and highways. But political messages have also started claiming space on the vehicles—and on social media—in a country growing ever more anxious about free speech.

Look among the neon-bright flowers and birds and there are snippets of Urdu love poetry, whimsical couplets and increasingly, provocative slogans and satirical observations. Slogans such as “Salute to Pakistan’s military” and “I miss you after you stepped down” adorn trucks, alongside a painted portrait of 1960s military ruler Field Marshal Ayub Khan.

These hark back to the country’s three periods of military rule—seen by some Pakistanis as golden eras of calm and certainty in the nation’s turbulent history.

Others comment on more contemporary issues, like the rickshaw driver lamenting the population’s apathy about Pakistan’s troubled condition with “Honk low, the nation is sleeping.”

Malik Latif, 50, a painter and artist who draws colorful motifs and inscriptions on the mighty goods trucks in Rawalpindi, said the drivers like to use their vehicles to express themselves.

A truck parked nearby had a tiger painted on its rear with a famous quote from Tipu Sultan, an 18th-century prince revered in Pakistan for fighting against the British: “It is better to live one day as a tiger than 100 years as a jackal.” Another truck carries the inscription “Long Live Islam” over a colorful picture of a bird perched on a globe, symbolizing the dominance of the religion in the country.

Photos of rickshaws with barbed and often funny slogans are proving extremely popular on social media and political blogs, acting as a space for comments that might otherwise be censored. Mohammad Yaqoob’s rickshaw carries a portrait of Tahir-ul-Qadri, the populist cleric who last summer staged a long, noisy protest in Islamabad aimed at ousting the government of Prime Minister Nawaz Sharif over election fraud claims.

“I am carrying this poster on my rickshaw because I want to change this system, as it denies rights and earning a livelihood is becoming increasingly impossible for poor,” Yaqoob said. “Only the rich benefit from this system and poor daily wage earners like me are suffering and cannot feed their children.”

The Army is a dominant force in Pakistan and publicly criticizing top brass remains a risky taboo. But an anti-military rickshaw inscription—“I salute you Pakistan Army and I kiss your sword, because whenever it has struck, it has struck its own people”—did the rounds online a couple of years ago.

Progressives in Pakistan are increasingly concerned about dissenting voices being stifled. Mainstream media often self-censor on “sensitive” topics such as the separatist movement in Balochistan province. Last month a prominent rights campaigner was shot dead in Karachi minutes after hosting a seminar on alleged abuses in the restive province.

Political analyst and director of the independent Center for Civic Education Zafarullah Khan says the trend of displaying political messages on rickshaws is an innovative mode of expression. “People want to talk about the developments affecting their lives and when these expressions do not find any space in mainstream media, they start appearing on walls, buses, trucks and rickshaws,” he said. “Now the political messages carried by the rickshaws have a wider audience via social media as people take their pictures driving behind them and share among their social circles.”

One rickshaw-wallah had a more poignant message, however. After the Pakistani Taliban massacred more than 130 children at a school in Peshawar in December, he painted his vehicle in honor of their memory. “O martyrs of Peshawar, we are ashamed. We pledge to make Pakistan peaceful,” read his inscription.