Pakistani ‘Father of the Taliban’ Drops Out of Peace Talks 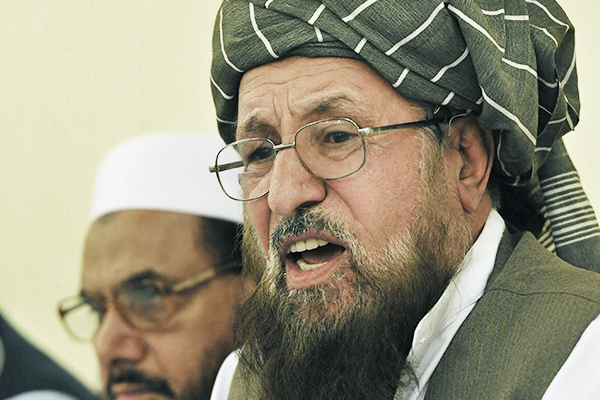 Sharif denies Haq was ever asked to mediate with the Taliban.

Maulana Sami-ul-Haq, a Pakistani cleric and politician who is considered close to Taliban chief Mullah Omar, announced on Wednesday that he would no longer act as a government-backed peace broker with the militants after airstrikes killed 40 suspected militants in the country’s lawless federally-administered tribal areas.

Prime Minister Nawaz Sharif’s “government does not seem serious and concerned,” said Haq. “I had requested them to avoid a military operation and use of force, but yesterday it started bombing North Waziristan and the tribal areas.”

Haq, chief of his own faction of the religious Jamiat Ulema-e-Islam party and who heads the hardline Dar-ul-Uloom Haqqania seminary, said more fighting was not the answer. “Both sides are in a state of war. Innocent citizens and soldiers are dying. A military operation is not the answer: we should instead put all our passion into the process of talks. In such a situation I want to separate myself from this bloody tragedy.”

Haq said Sharif had sought his help last month in initiating peace talks and that he received positive signals after contacting the Taliban leadership, but “the lack of seriousness on behalf of the government” forced him to quit the process. Haq also complained that his letter and multiple calls to the prime minister had gone unanswered.

Sharif’s government announced its peace-talks policy in September and began making preliminary contact with the Pakistani Taliban’s leadership through proxies like Haq, but the initiative ended after a U.S. drone strike killed then-Taliban leader Hakimullah Mehsud in November. The Pakistani military’s airstrikes in the North Waziristan and Khyber tribal regions on Tuesday were in retaliation for two major recent Taliban attacks on military targets.

Haq recently came out in support of polio vaccination alongside Imran Khan, whose Pakistan Tehreek-e-Insaf leads the Khyber-Pakhtunkhwa government.

Sharif’s office responded to Haq’s complaints today. The Prime Minister’s Office says Sharif never asked Haq to mediate with the Taliban and that Haq misunderstood what was discussed between them.

so he wants pak army to to wear bangles and sit and watch….go f— urself idot…PAK ARMY ZINDABAD

but actually dialogue is most important for bringing peace in the country..

Good riddance! Keep Samiul Haq out of this. He is the last thing from a fair broker. He is the TTP Trojan horse who will undermine the resolve of the Pakistani public and government to take on the TTP at every turn. When he does not have the courage or the decency to call out TTP’s murderous attacks, then its best for him to keep his mouth shut and stay out of this.