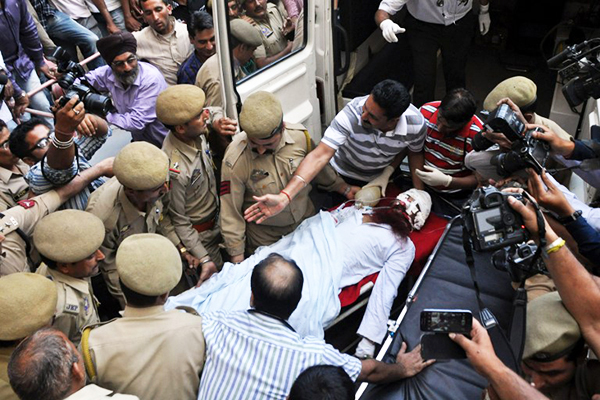 Ranjay in Jammu, May 3. AFP

Ranjay’s relatives will bring his body to Sialkot.

Sanaullah Ranjay died early morning on Thursday, six days after being attacked by an inmate at a jail in India-administered Kashmir. He was 52.

“His condition was extremely critical,” a doctor at a government hospital in Chandigarh, India, said of his Pakistani patient. “He died early morning.” Ranjay suffered renal failure on Wednesday and was in a “deep coma.” His body is being handed over, “as per the instructions of the government,” to two of his relatives who arrived in India on Tuesday.

Ranjay was attacked in Kot Balwal jail in Jammu the same day that Sarabjit Singh was cremated with state honors near Amritsar, India. Singh, who was serving time in a Pakistani prison on terrorism charges, was fatally wounded in Lahore’s Kot Lakhpat jail. Ranjay was attacked, Indian officials have said, in likely retaliation over Singh’s death.

Ranjay, convicted of murder and from Sialkot, was working in the jail garden on May 3 when he started arguing with Vinod Kumar, a former Indian Army soldier serving life imprisonment for killing his brother. According to preliminary reports, Kumar hit Ranjay’s head with a brick. He is currently in police custody on a seven-day remand, an investigation is ongoing.

The reciprocal jail violence has created fresh tensions between Pakistan and India. At Singh’s cremation, which was attended by Congress party leader Rahul Gandhi, angry crowds denounced Pakistan and burned its flag. After Ranjay’s assault, demonstrators took to the streets in Pakistan-administered Kashmir.

Two days ago, the Ministry of Foreign Affairs in Islamabad issued a travel advisory for Pakistanis intending to visit India. “We have seen some disturbing reports in the Indian media which indicate that the safety and security of Pakistani visitors to India, including that of over 600 [people] scheduled to visit Ajmer Sharif … may be in jeopardy,” it said. “The government of Pakistan wishes to advise its citizens who are planning to travel to India to exercise due caution and care while traveling to various parts of India. The government of Pakistan would also call upon the government of India to ensure that necessary arrangements are in place to provide full protection to all Pakistani visitors to India.”

New Delhi says 535 Indian prisoners, including 483 fishermen, are in Pakistani jails, while 272 Pakistani prisoners are behind bars in India.