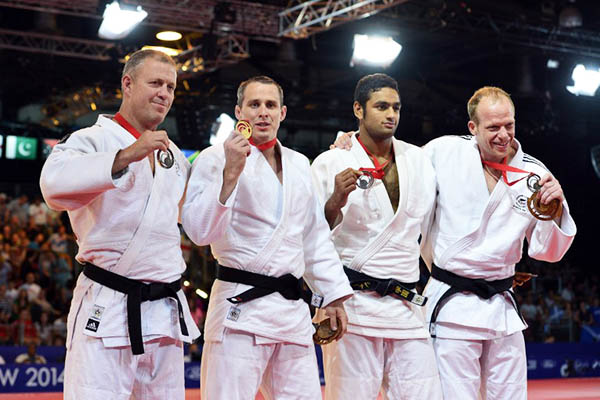 Shah Hussain won the silver medal at this year’s Commonwealth Games and hopes to take gold in Incheon.

Pakistan’s Japanese-raised judoka, Shah Hussain, will continue his unusual quest for glory when he tries to add Asian Games gold to his Commonwealth silver in Incheon.

Tokyo-based Hussain, the son of one of Pakistan’s most distinguished athletes, hit the headlines when he won 100kg silver at this year’s Commonwealth Games. Administrative chaos meant the 21-year-old nearly missed out on going to Glasgow. But his achievements there, along with his Japanese background, will give him an edge in Incheon.

“Japan has world judo champions, Olympic medalists and all of them have supported him, gave him some good tips,” his father Hussain Shah said by telephone from Tokyo. “So I am quite hopeful that he will show his talent in the Asian Games.”

Hussain comes from distinguished stock after his father became Pakistan’s first Olympic boxing champion at Seoul in 1988, before departing to live in Japan.

Ignoring advice from British former world champion Amir Khan to take up boxing, the young Hussain carved out success on the Japanese judo circuit. “I was always interested in judo and wanted to win medals and honors for my country, Pakistan,” said Hussain.

But his wins went unnoticed in Pakistan and it took months of phone calls and lobbying from his father before officials finally agreed to pay for his trip to Glasgow. “I had to make several calls to Pakistan from Tokyo, pleaded before the officials to send my son because I knew he has the potential to be a world champion,” said Shah. “And after all this hue and cry Hussain finally made it and showed the world we were right.”

Hussain beat Trinidad and Tobago’s Christopher George in the first round, Australia’s Duke Didier in the second and crushed New Zealand’s Tim Slyfield in the semi-final. In the final, home hero Euan Burton proved too much for the youngster, flattening him 110-0.

“I was ecstatic after winning the semi-final and wanted to win the gold but it was not to be,” said Hussain.

His silver in Glasgow, one of just four medals won by Pakistan, “breathed life” into the entire squad, according to Pakistan Olympic Association (POA) chief Arif Hasan. “His silver medal is more than a victory, hearing our anthem played at the ceremony was overwhelming,” he said. “His feat … breathed life into our entire squad. Our whole contingent, even players from other sports, went crazy over this.”

Now Hussain and Pakistan will hope for more success in Incheon, where he is competing with Asia’s finest including some of his rivals from the elite Japanese circuit.